By David Clements | July 9, 2014 | 6 Comments | Blog, Uncategorized
WHAT INITIALLY caught my attention on Hamilton Ave. was the Trayvon Martin memorial wall painting on the south wall of Sheps Barber and Beauty Shop. This is the second memorial image in Detroit.  I met Terry cranking down the steel entry cover. We struck up a conversation and I set an appointment to visit. 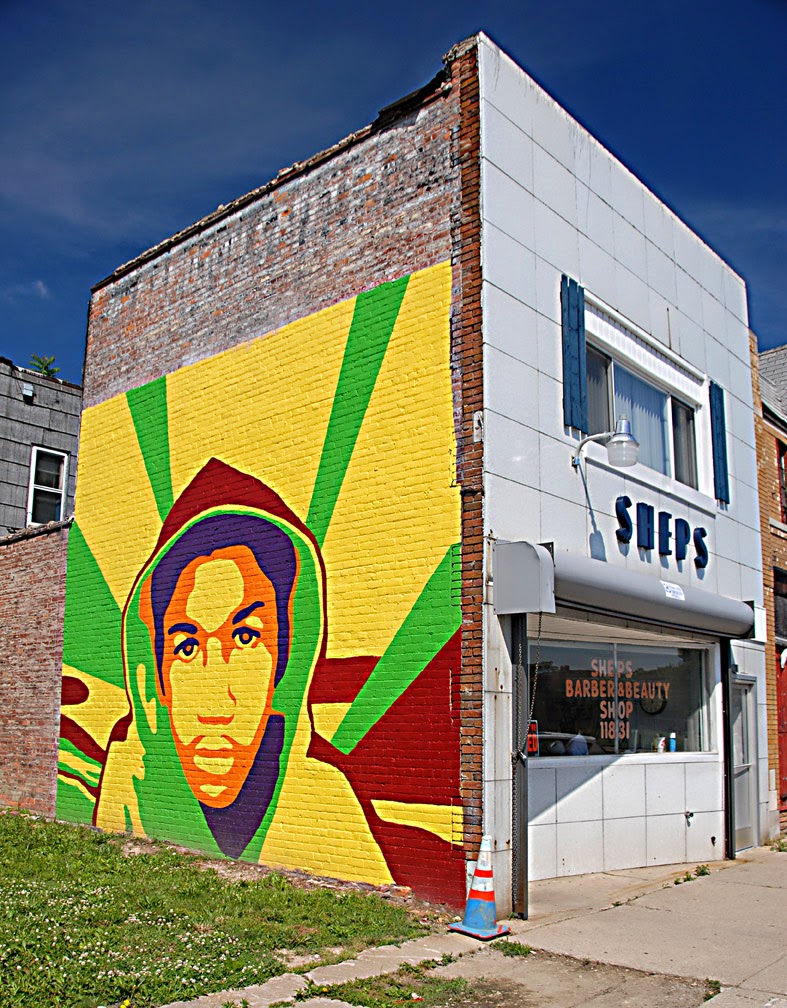 Sheps is a landmark. The oldest black owned barbershop in Highland Park, since 1944.  The barber/beauty shop has been a culture treasure and community communication center since 1965 at its present location on Hamilton Avenue, in Highland Park, a city within Detroit. 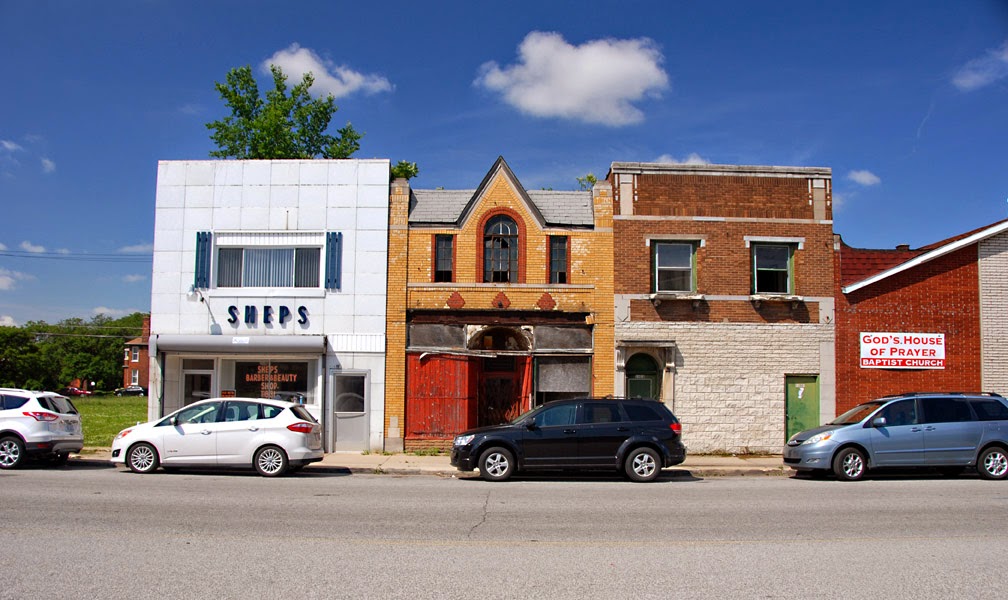 Sheps now anchors one end of a barren streetscape of empty land, abandoned buildings, and God’s House of Prayer at the other end. 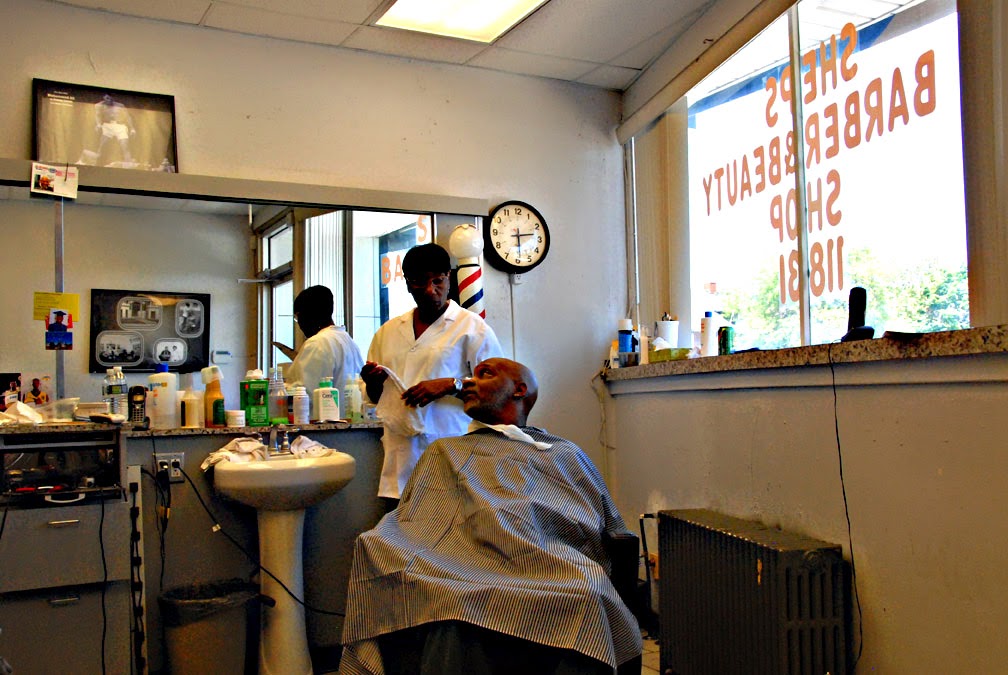 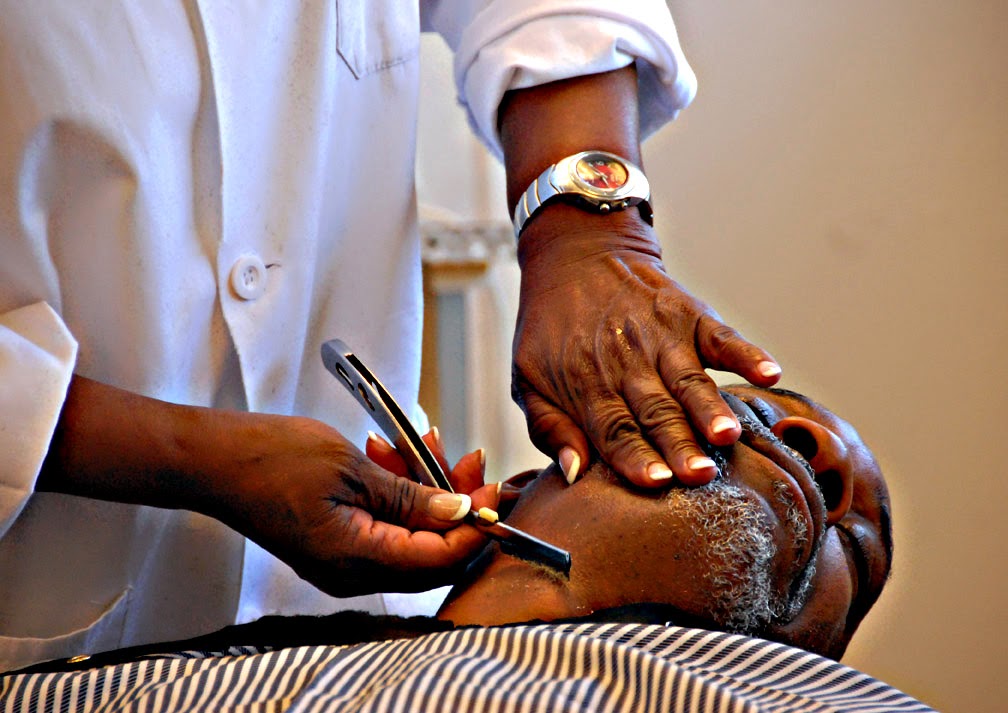 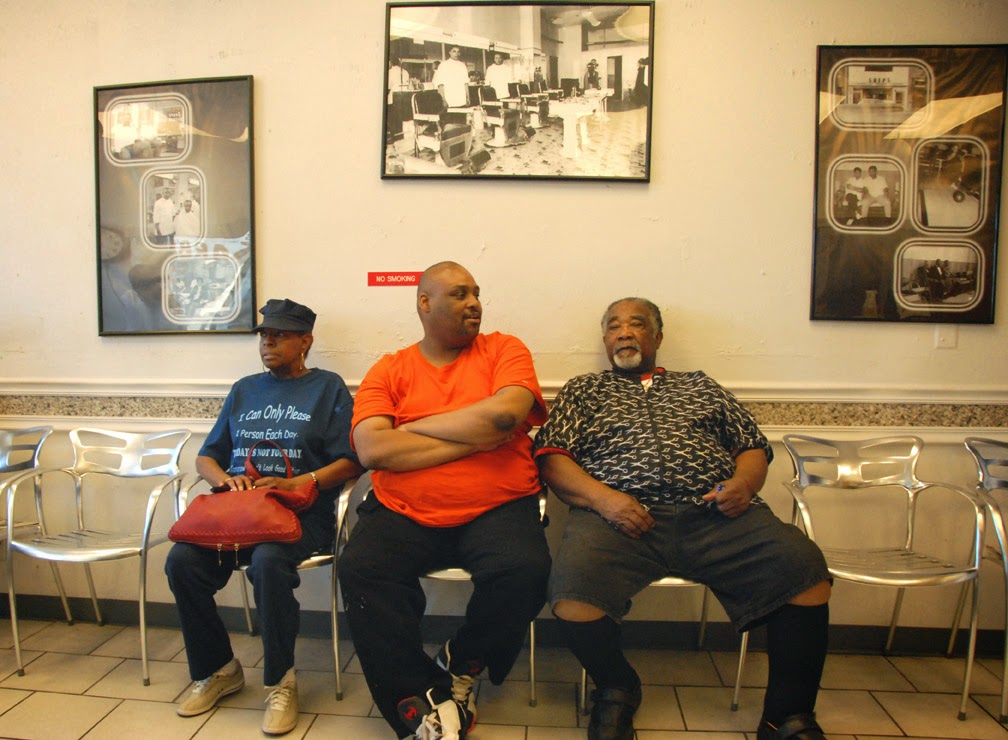 Shop walls display Sheps 1945 diploma, an image of him working in a shop in New York City, a variety of local business honorariums, and historical photos of the building, barbers and family. 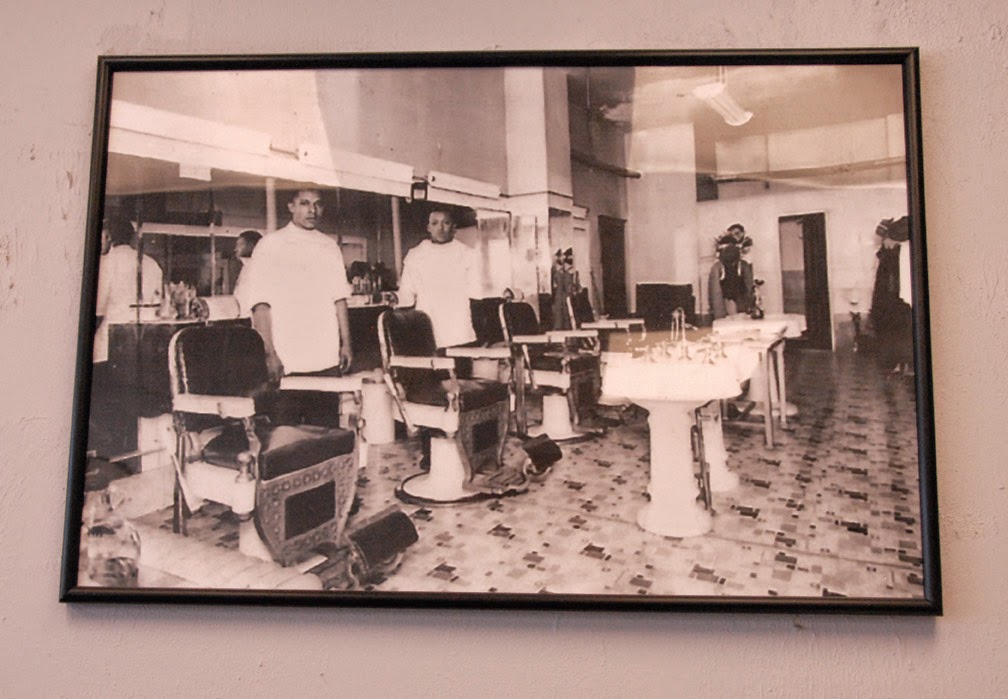 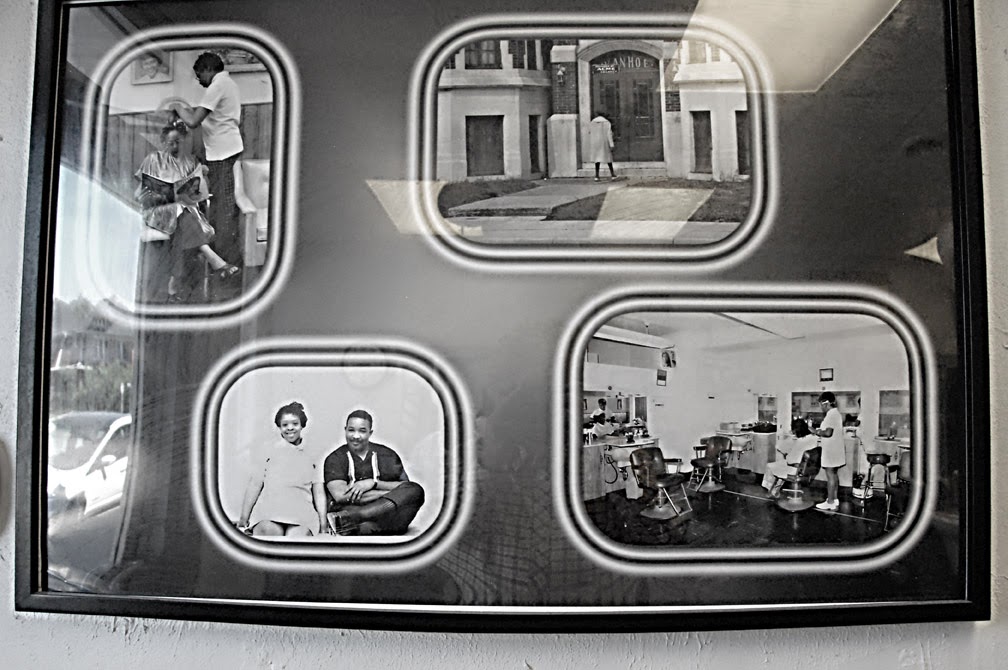 “On Saturday the shop used to be packed wall to wall with men – all waiting for their cut from her uncle Richard Sheppard – “Shep” and fellow barbers,” notes owner/niece Dorothy Grigsby, “Highland Park was booming…Ford and Chrysler were here. I worked at Ford, and got layed off again in 1980. I decided to go into hair. It was a more stable career”.  A year later I went to work for uncle Shep, and have been here ever since.”Shep retired in 2000.
After “9/11” business really started to decline. It’s a daily struggle to make a living, pay for insurance, and deal with rising fire inspection and business permit fees Highland Park wants to collect from her.
She is just hoping for a better day and some new customers. 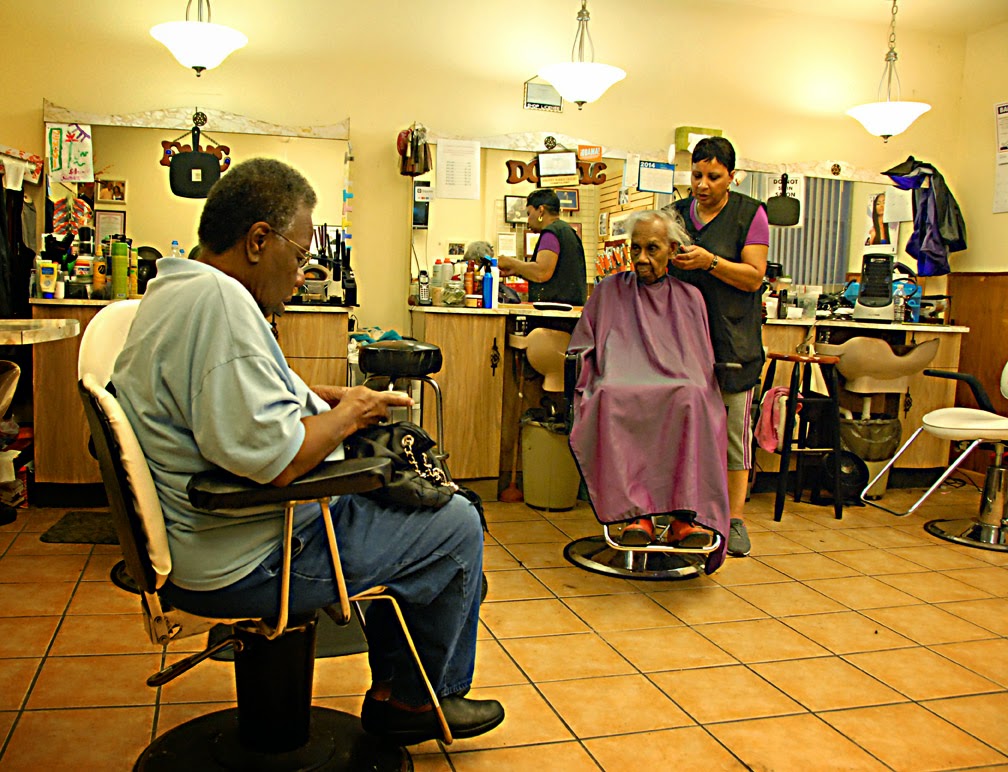 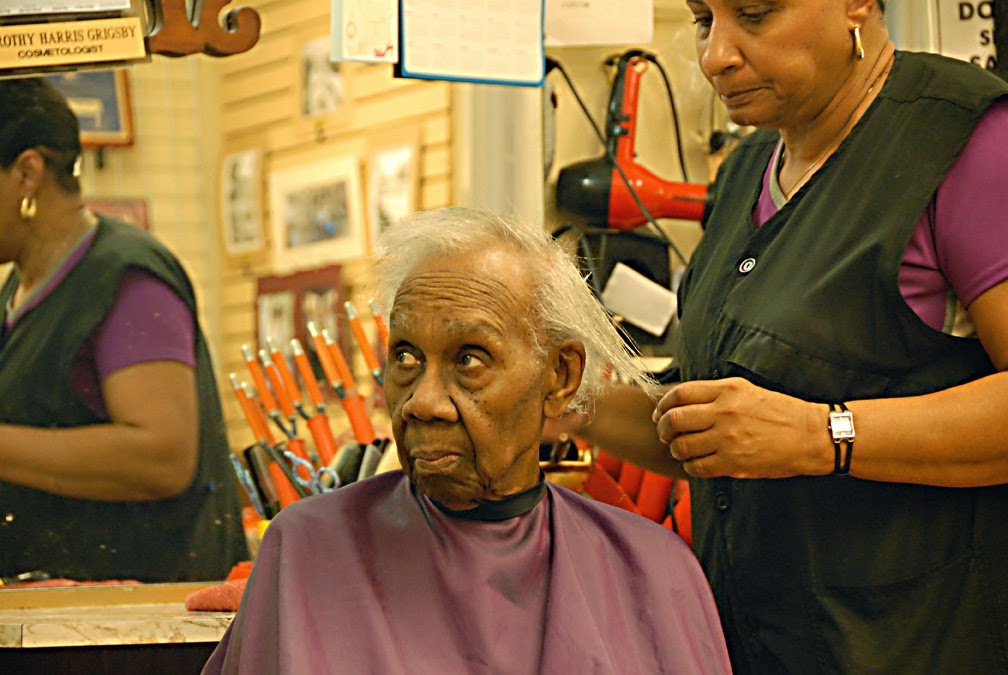 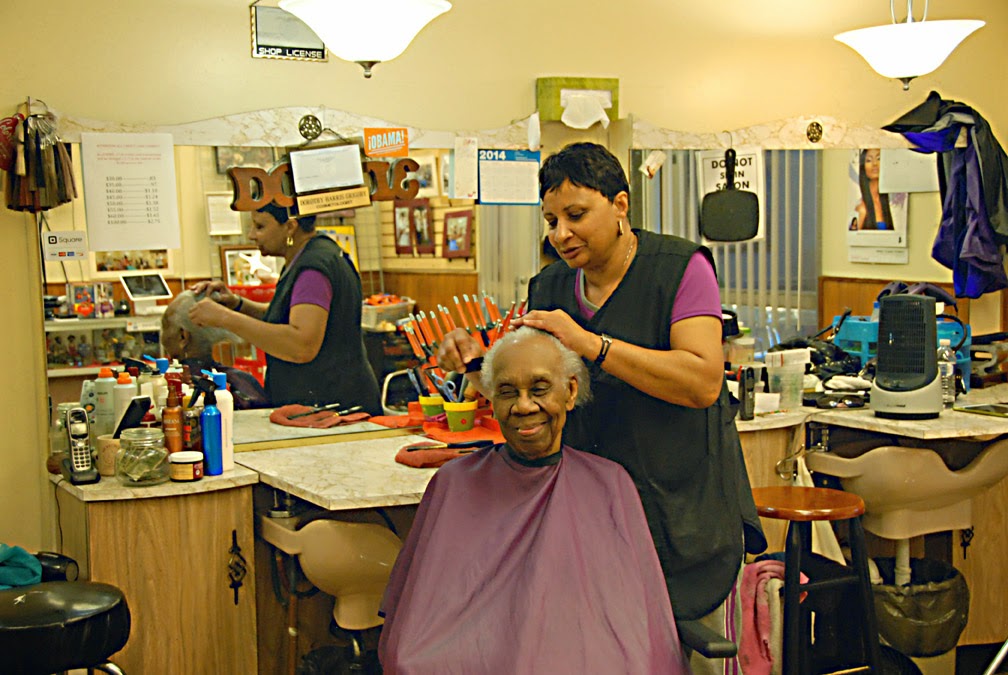 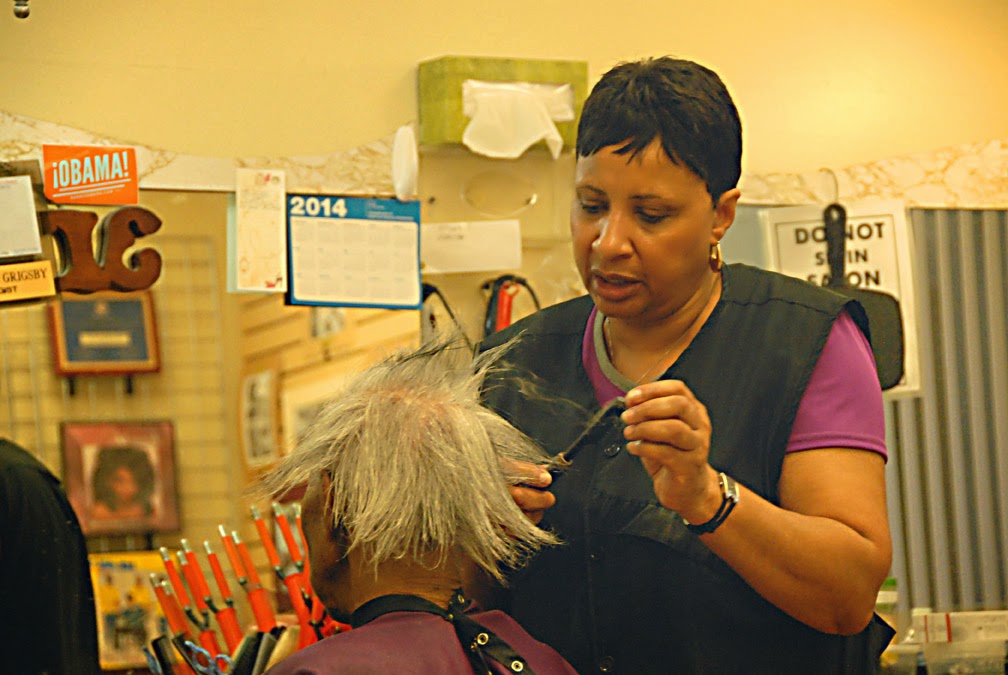 Current business is a little walk in, and mostly loyal customers who drive in for their services. 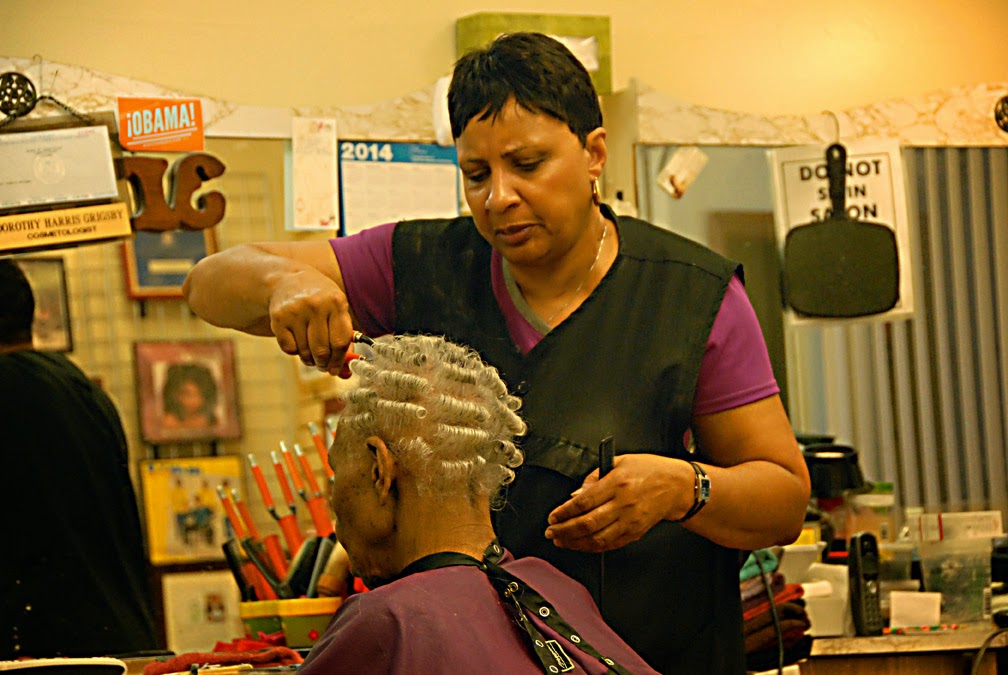 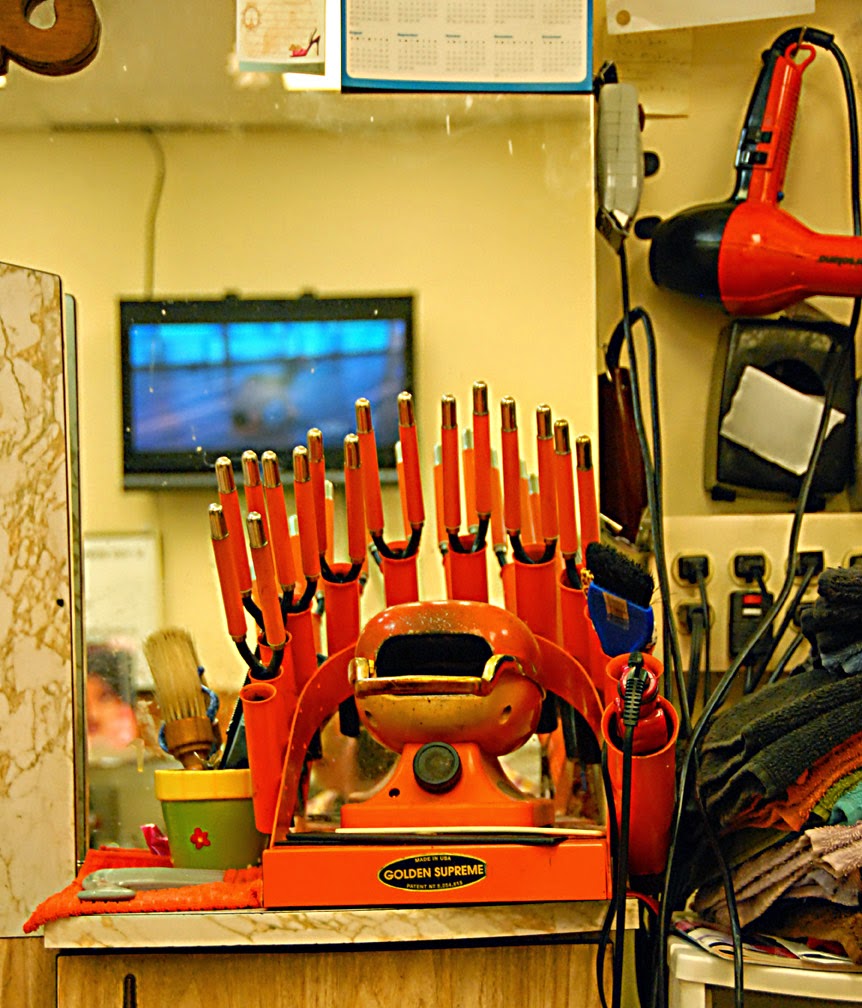 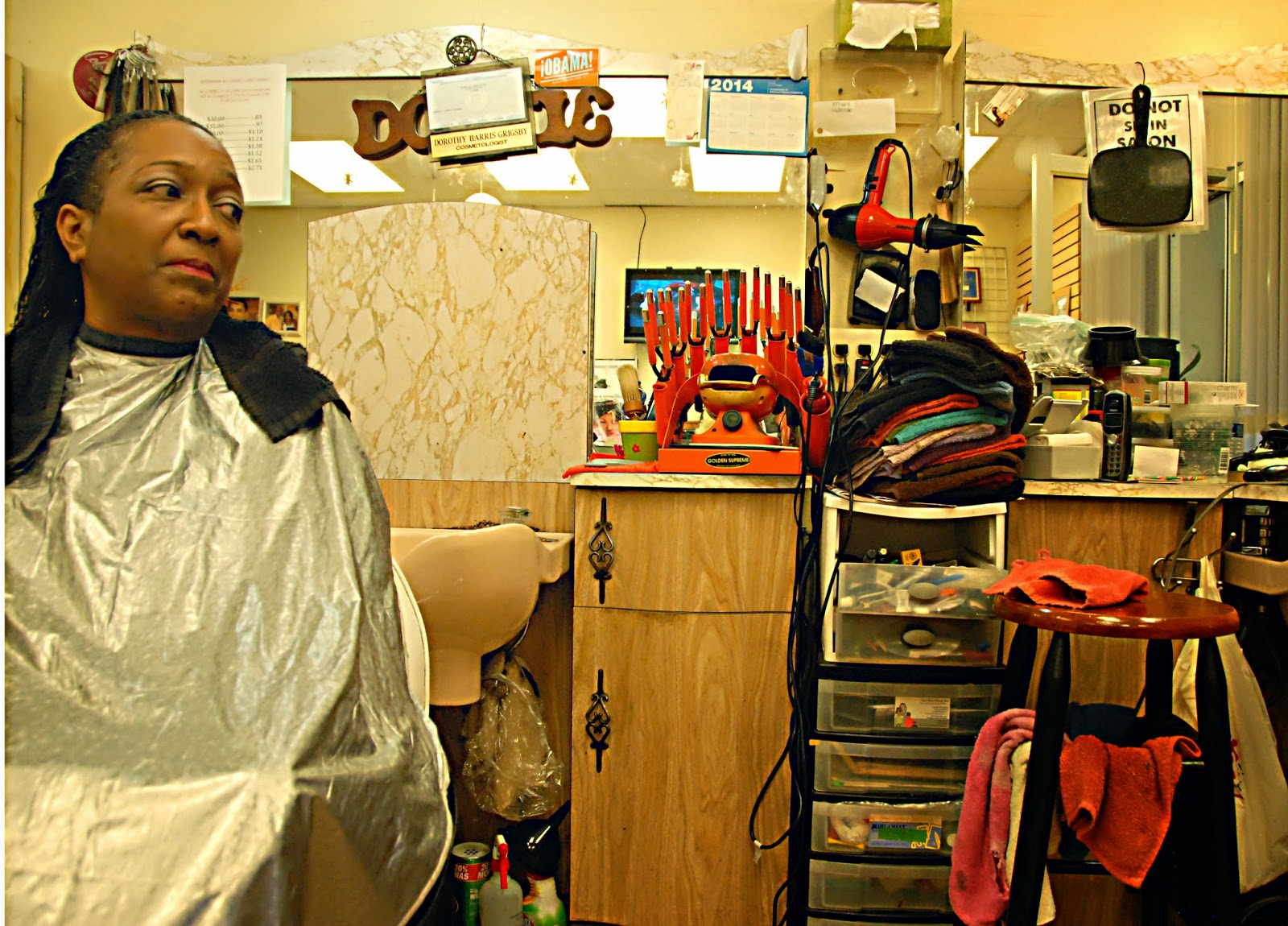 “No one touches my hair but Dorothy !  For 30 years I have been coming to Dorothy, driving here from Pontiac, Michigan”, says loyal customer Linda. Pontiac is a good 20 miles north 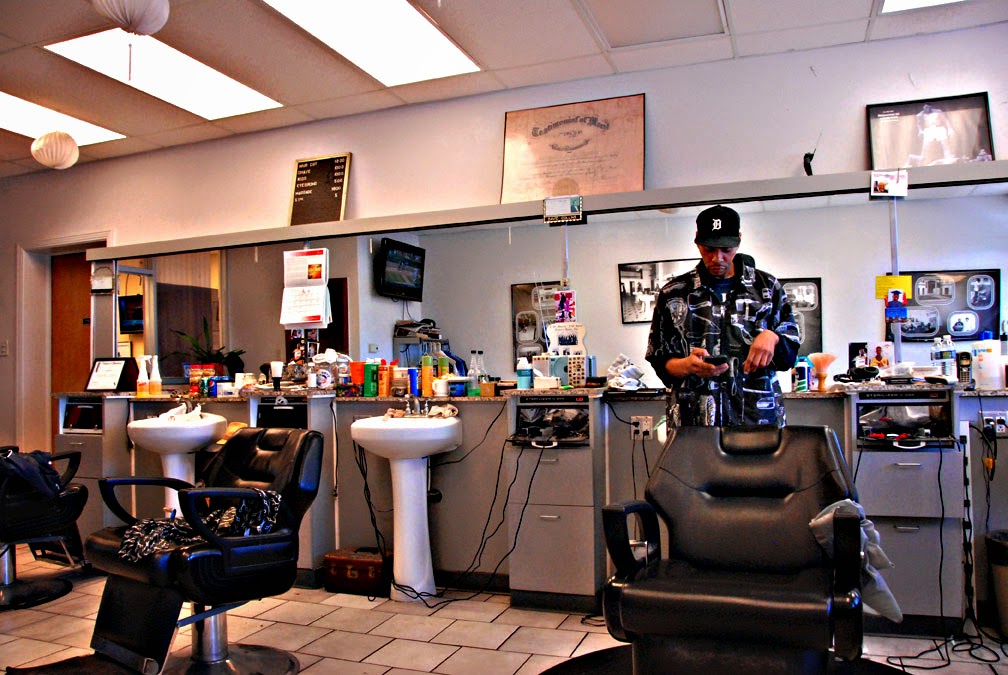 Terry Grigsby, son of Dorothy has been cutting hair since 1992. A Michigan Barber College graduate, he worries about business prospects and an empty chair.  Not a lot to look forward to when Dorothy retires. He does not have a strong pension to support him in the future. 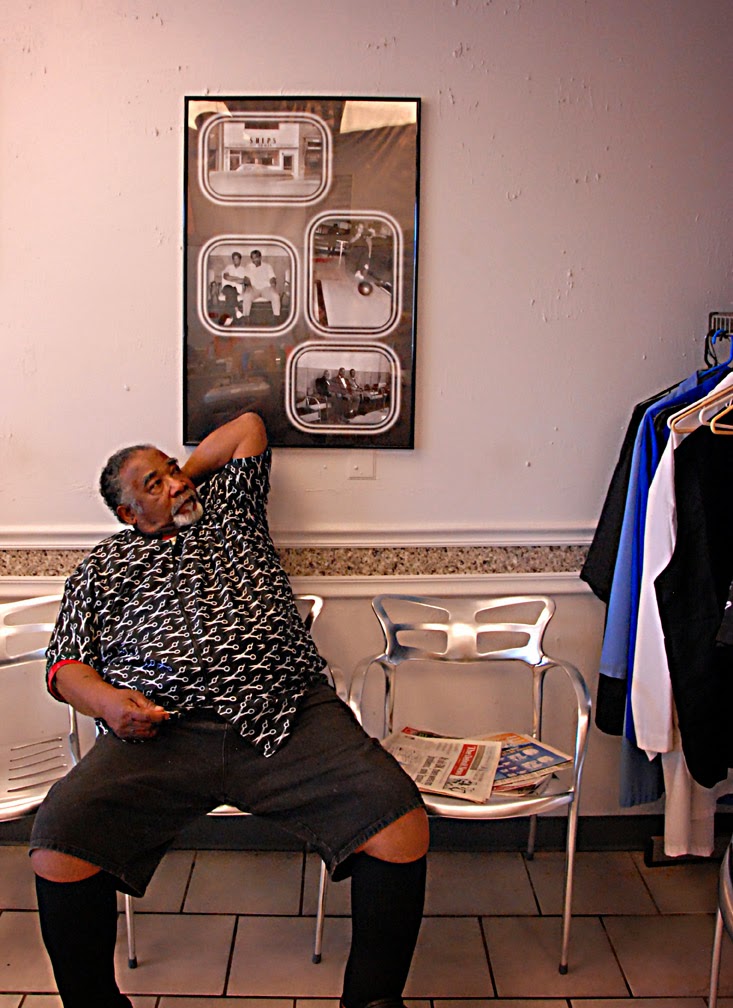 Long time employee David Collins, age 86, apprenticed under Shep for two years at an earlier Highland Park location on Oakland Avenue in the late 1950’s. He cut hair on Saturday, while working full time at various Chrysler plants until his retirement in 1985. “We never stopped on Saturdays,” David recalls. That was a long time ago.
End
Tagged Photographic and Historical Record of Detroit's Vanishing Advertisements