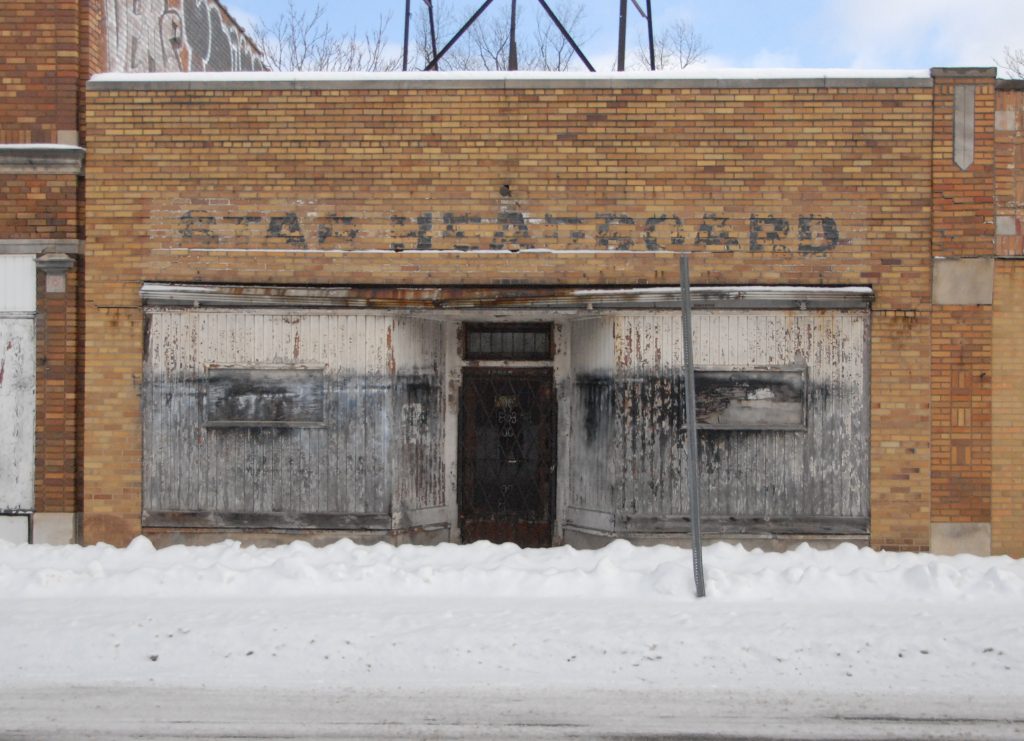 My first part-time job after relocating to Detroit in 1968 at 666 W. Willis–Alpine Court was as a delivery assistant to a guy from India, who lived on the 3rd floor that reeked of Indian spices. We drove north on Hamilton Avenue into Highland Park on cold winter mornings, in a leaky van and picked up “Star Headboards” – home of the hand-built stuffed and -tufted products destined for rich suburban beds. 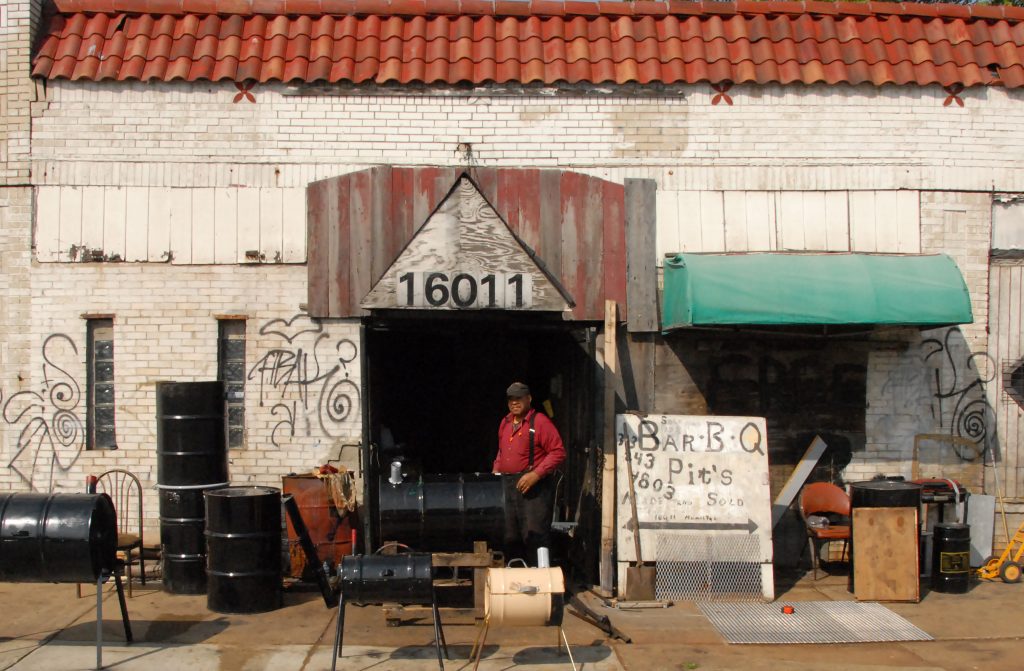 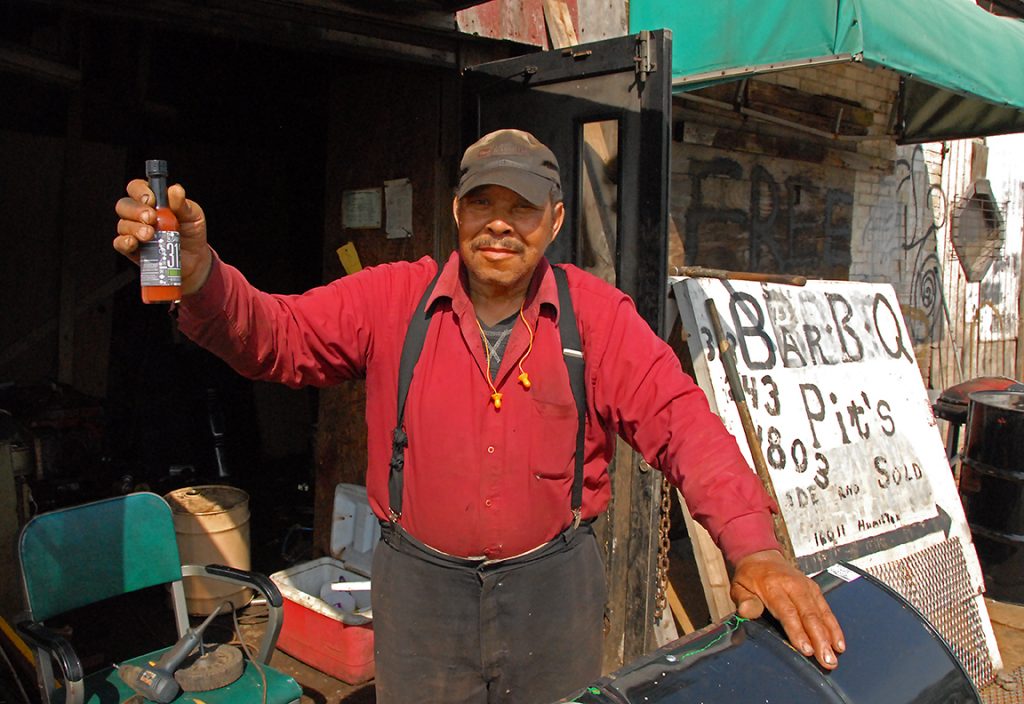 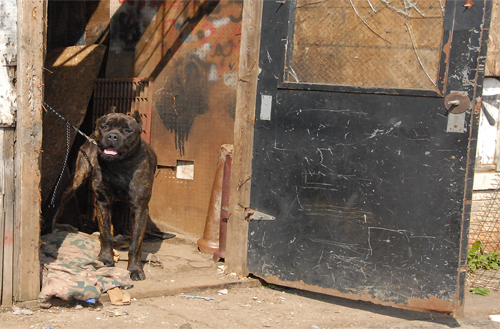 Over the years, I liked to drive north on Hamilton. There I met Alfred Thomason – Reverend Mr. T. He had once pastored a Congregation locally, and now had a booming business selling hand-built domestic BBQ Technology. He was backed by his dog. 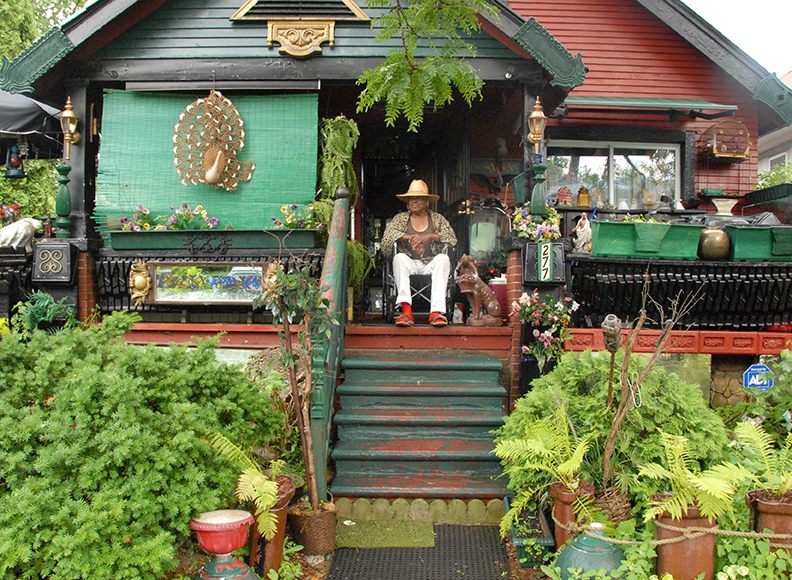 The last businesses on Hamilton are scrap dealers. A survivor was Mr. Jackson at 277 W. Grand Avenue. He had piled up all sorts of materials on his front yard, and created a lush summer front lawn. His home was packed with valuables. He did not wish to show me around inside. 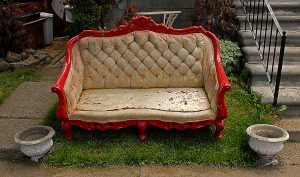 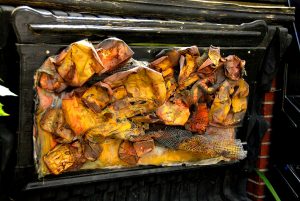 He claimed that his art – now mounted with nails to the porch railings- was exhibited at the Detroit Institute of Arts. 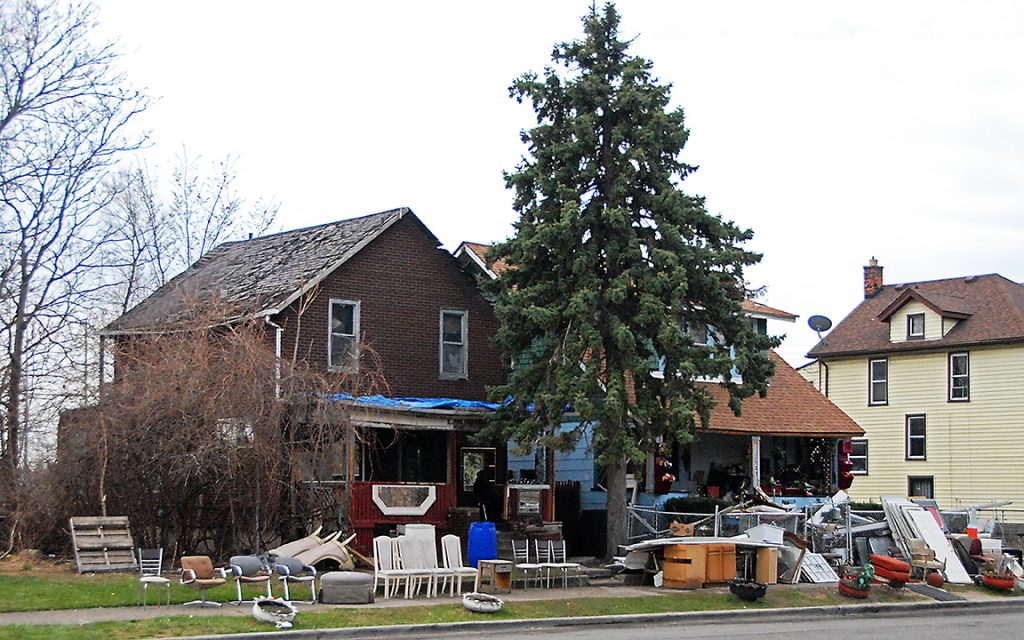 An additional scrap dealer is at 1521 Labelle Street. The owner lives next door. 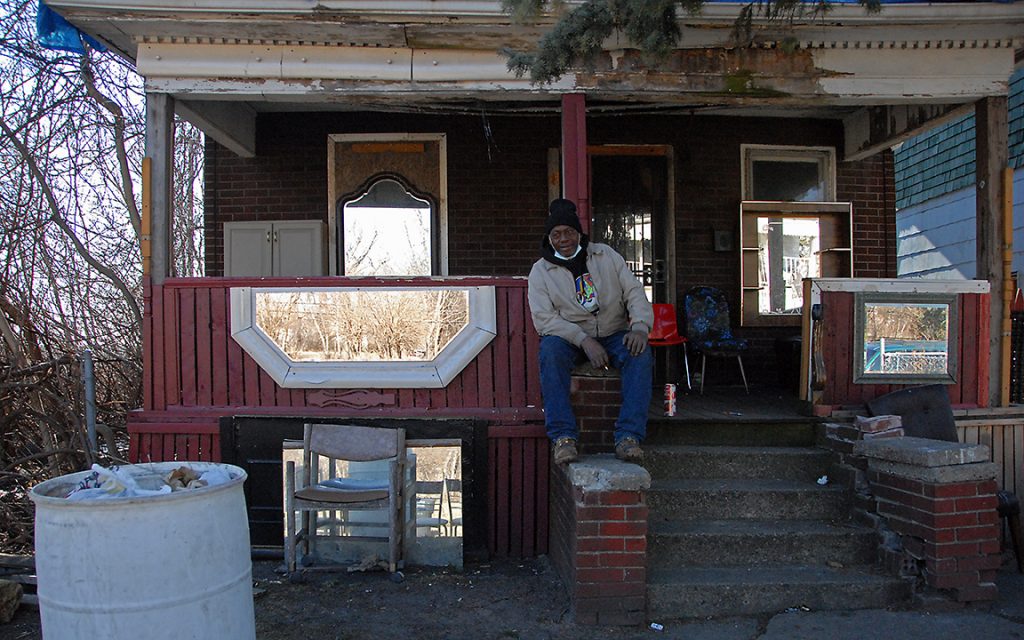 Tony keeps an eye on the merchandise lining the curb prior to a visit to the local liquor store.

This location is in the Northwest corner of HP/ and in Detroit. This property may miss the Highland Park redevelopment. I wonder if the new developer would like to see this, and other local housing, cleared to the Lodge Expressway too? 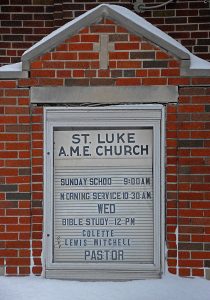 What has really struck me is the absolute removal of all property west of Hamilton Ave. on the border of Detroit. This neighborhood was built quickly, from 1910-1916, to provide housing to a booming hourly and management class at Ford and surrounding businesses. 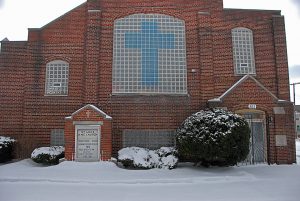 On Hamilton at the Eastern edge of the total urban renewal project sits God’s House of Prayer, rich with history of red paint. 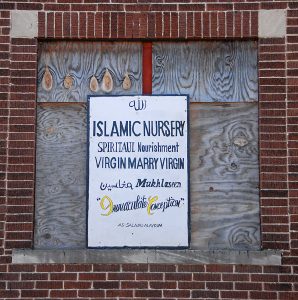 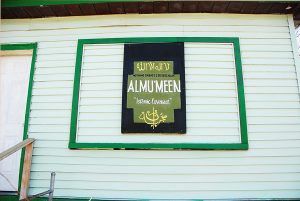 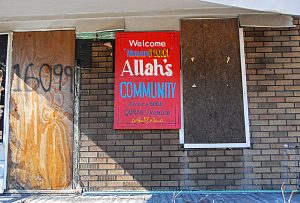 More recently, the Muslim community has tried to colonize the remaining structures on Prospect Street and Puritan in HP. 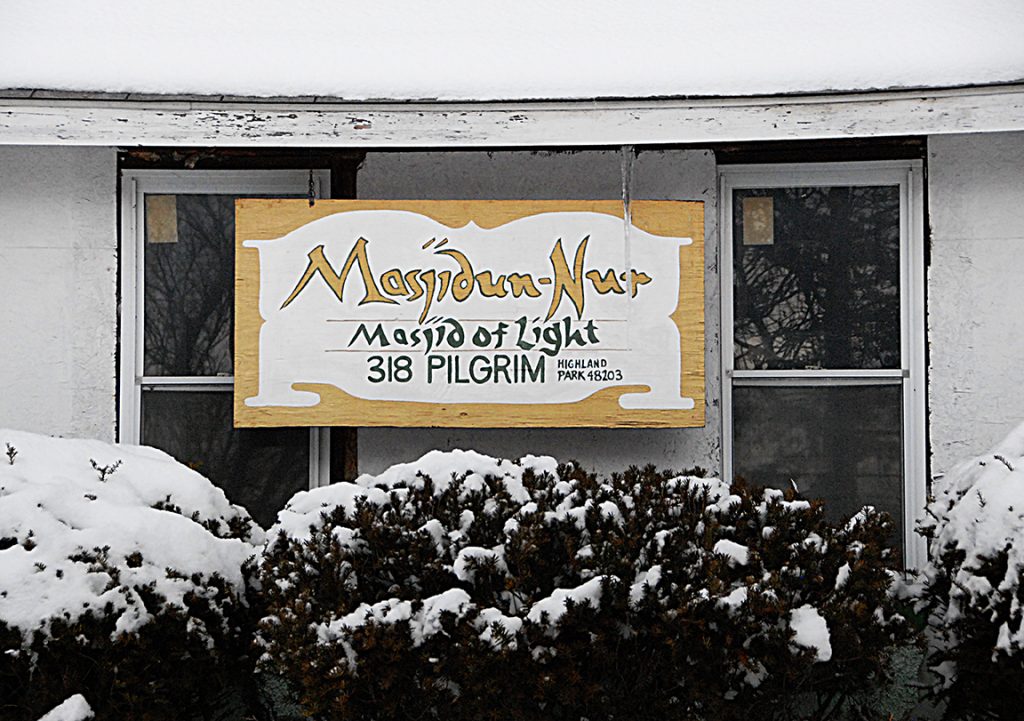 The Masjid of Light Muslim Center at 318 Pilgrim is a reminder of religious inclusion. 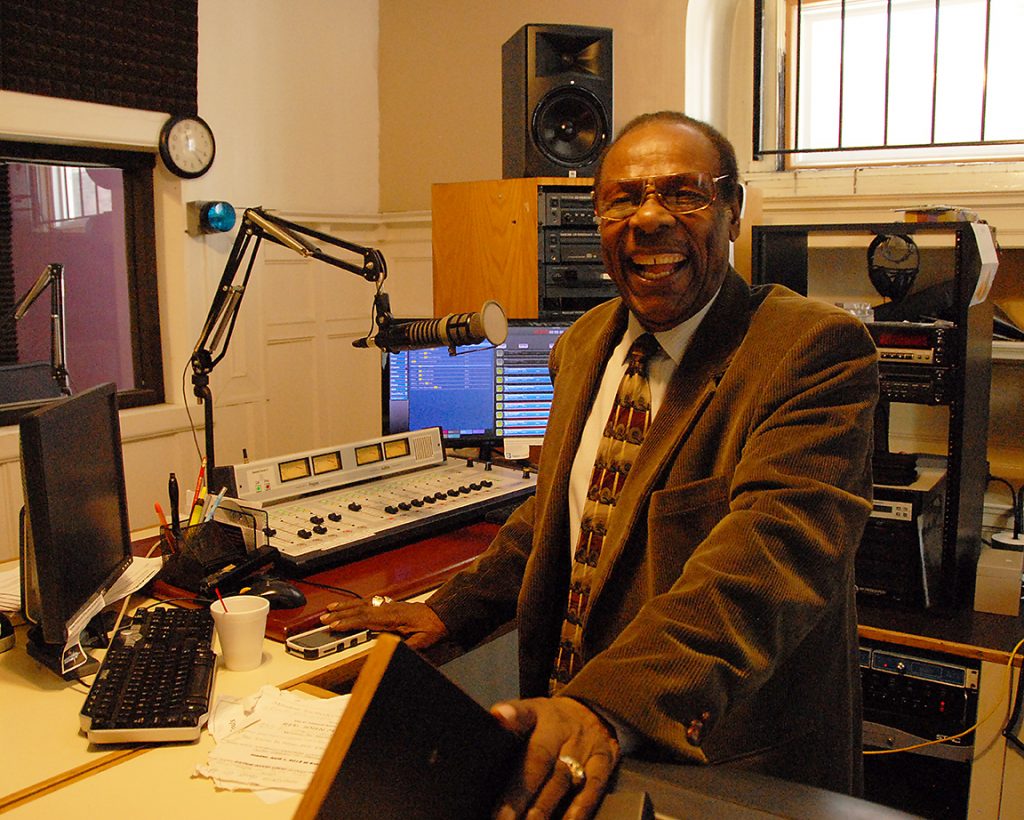 I attended a church service, it was jumping! 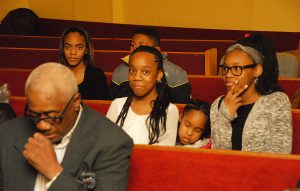 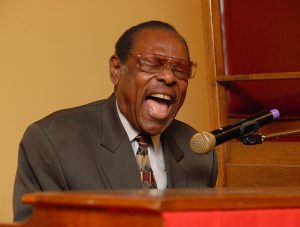 Opposite the Temple of Love on Hamilton is the very neat home of Mr. and Mrs. Thaxton. Photographer Janice Milhem (janicemilhemimages.com), and I met them as we shot pictures of the Temple. They greeted us in their driveway upon returning from church in coordinated outfits. Great people and proud HP residents. 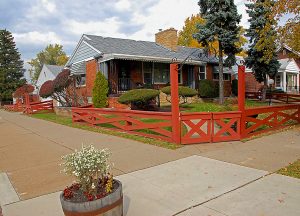 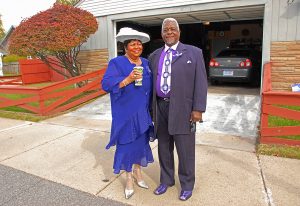 The gold and white façade of Fellowship For Christ just glows. Just north, peaking around the corner, is the Travon Martin mural on the side of Sheps Barbershop. 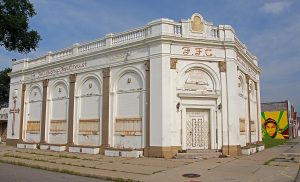 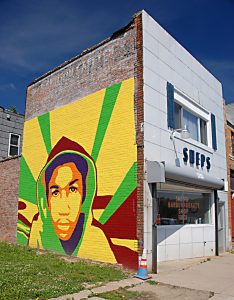 North from Sheps, at 6065 Hamilton, is a very powerful wall mural, “Way To Many” by Sidney G. James. This is a very impressive scroll of names. The expansive effort of wall art attracts visitors and memorials. 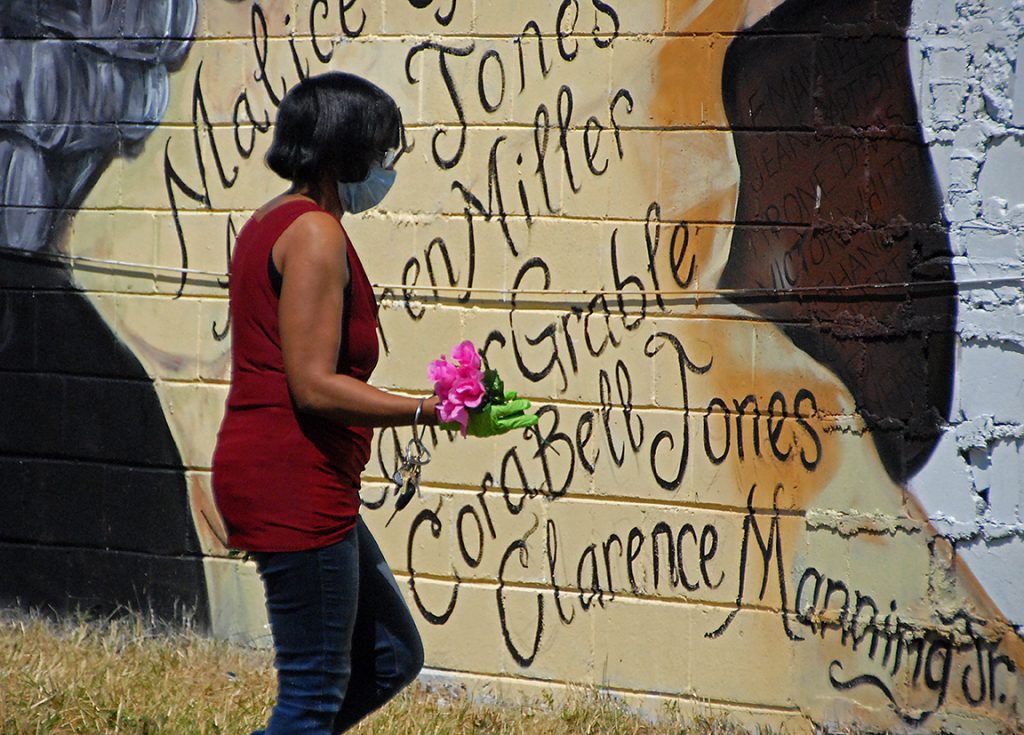 The oldest wall mural on Hamilton was an advertisement promoting Honor Black and Black Beauty clothing, copyright 1914, by a shirt maker out of Chicago. The House of Jacob now occupies the building. 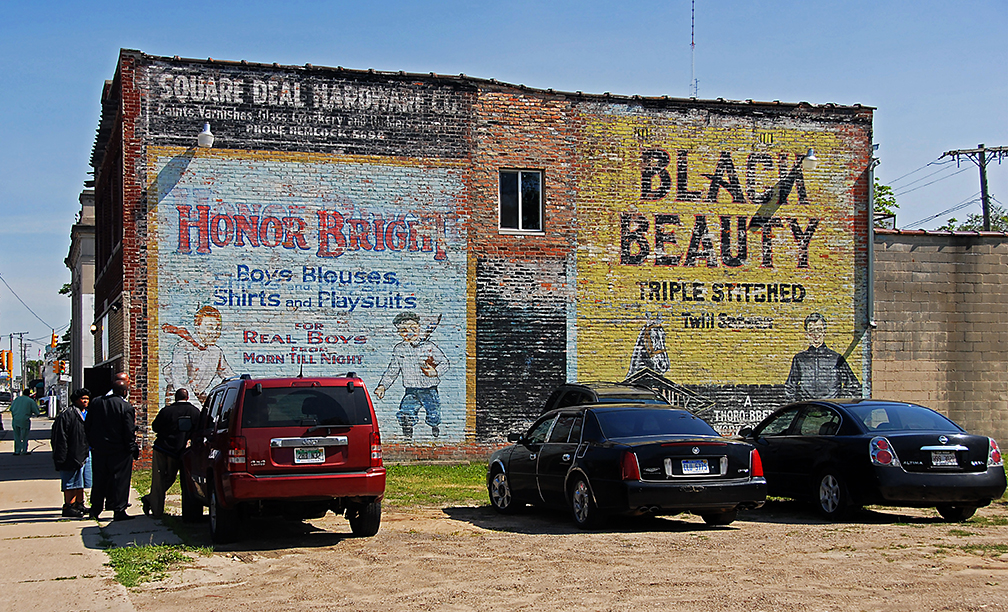 Ms. Milhem and I spoke to church members, prior to a service, on a hot summer day in the parking lot about preserving this wall advertising – perhaps the only image left in the world. The membership reacted, quoting scripture about worship adornment. Soon the north facing wall of Honor Bright product images were painted over. That pissed me off. 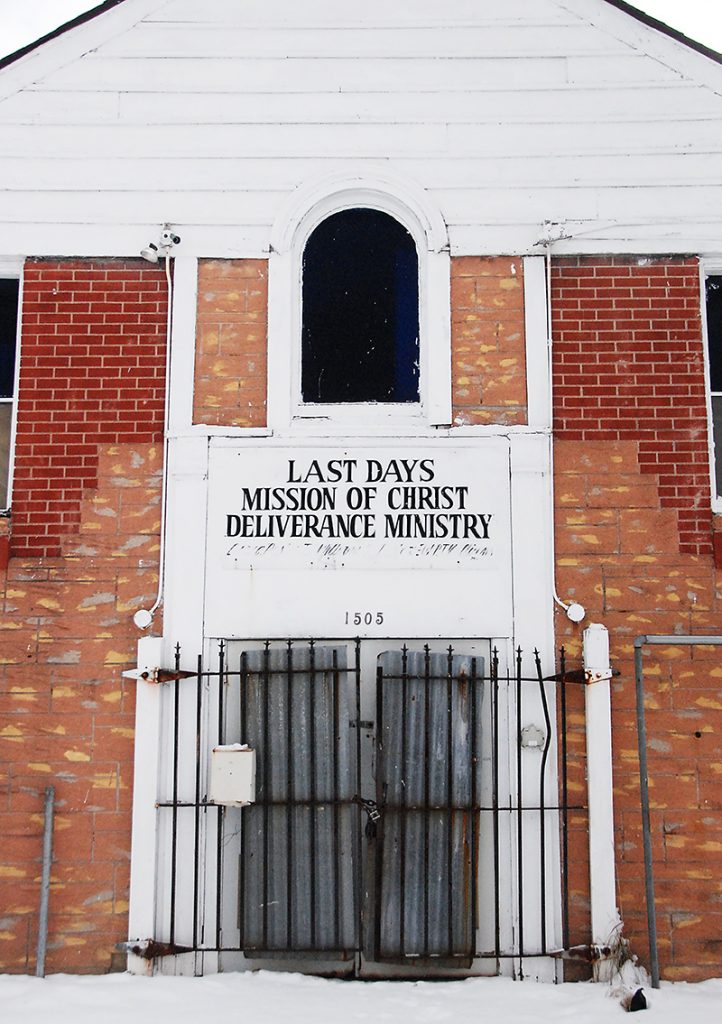 A real signal of things to come, and the best church example, is Last Days Church of Christ Deliverance Ministry on Ford St. I found this location to be a great view in February and April of 2021. Hamilton Avenue corridor cuts thru Highland Park west of Woodward with a destiny of early 20th Century urbanization and commercialization. The Eastside may be savable based on arts and crafts housing, some security and a little commercial business. 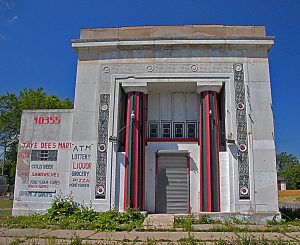 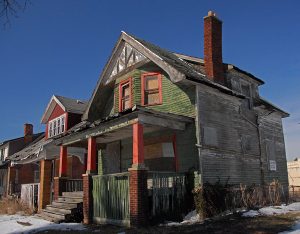 The first west side urban architecture on Hamilton north of the Davison Expressway is nearly gone. Nearly all the land has been cleared, sidewalks gone, and utilities out of sight. A second urban cycle of redevelopment projects will slowly begin. My guess is that commercial businesses will move on to huge tracks of this land with no residents present.