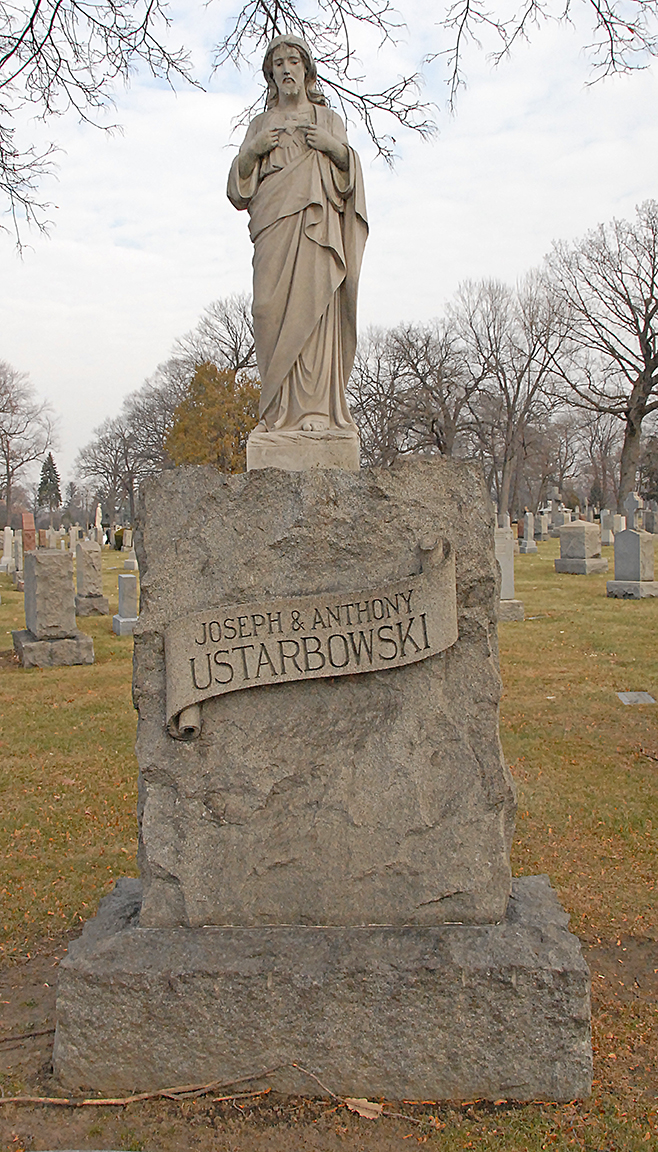 The urban expression of a memorial is usually exhibited as a sculpture, park, roadway or a tombstone. A good example is the largest cemetery in Detroit, Mt. Olivet, whose mission to serve Catholic burial needs has been the soil of choice for over 400,000 faithfuls. Between 1920-1950, Detroit may have been the largest Catholic city in the US as it was a destination of immigrants from other Catholic communities. Over the past decades the decline of Roman Catholics has forced the cemetery to welcome other Christians to their eternal land. 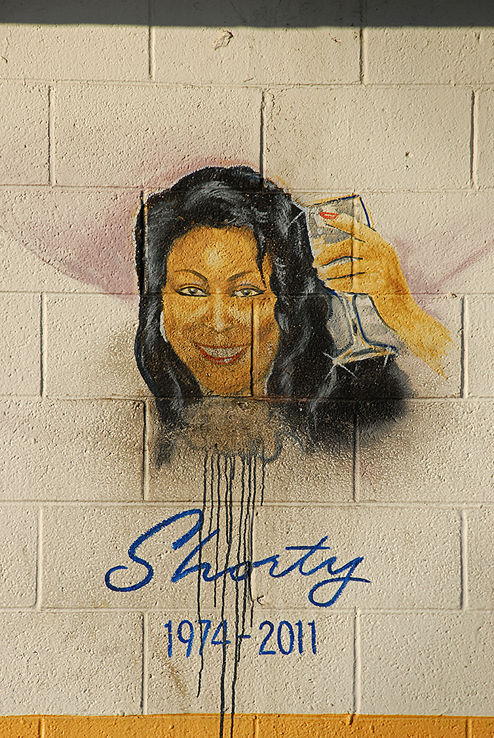 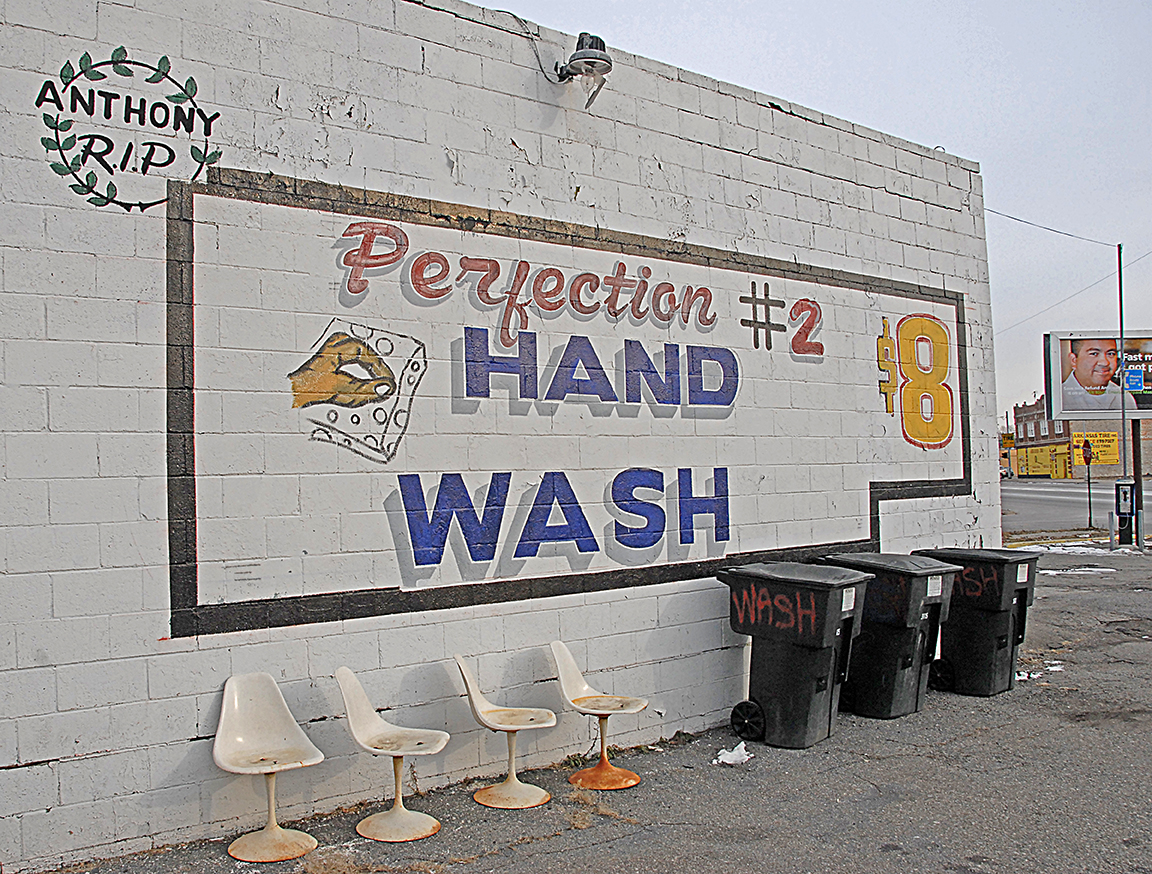 In Detroit, memorials are often more personalized and profound than the tombstones found in cemeteries. Car washes are a popular place, and revenue generator, for many memorials. The portrait of Shorty, I assume refers to her height, not her brief life at Mr. Splash Car Wash. And there’s a nod to “Anthony RIP” at Perfection #2 Hand Wash with plenty of seating. Perhaps that is Anthony’s left hand.

These individually produced memory sites – RIP memorials to an individual are often announced at Stop signs, surrounding poles, using a full side of a building, in empty corner lots, and often spanning half a block of open land. These memorial landscapes keep past individuals alive in a common memory for a while longer.   If you add the thousands of passers-by, a lot of people know the image of the late Yvette and Michael as their images move to ephemera. 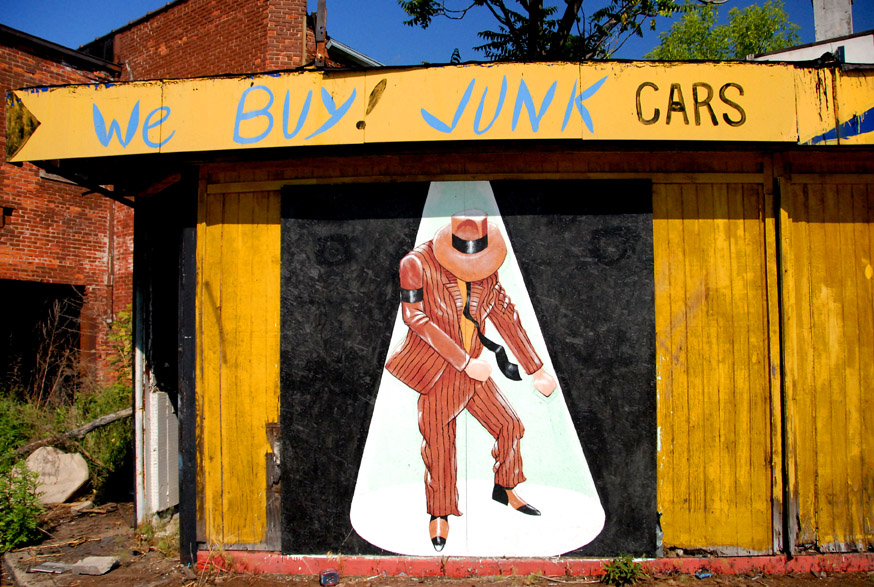 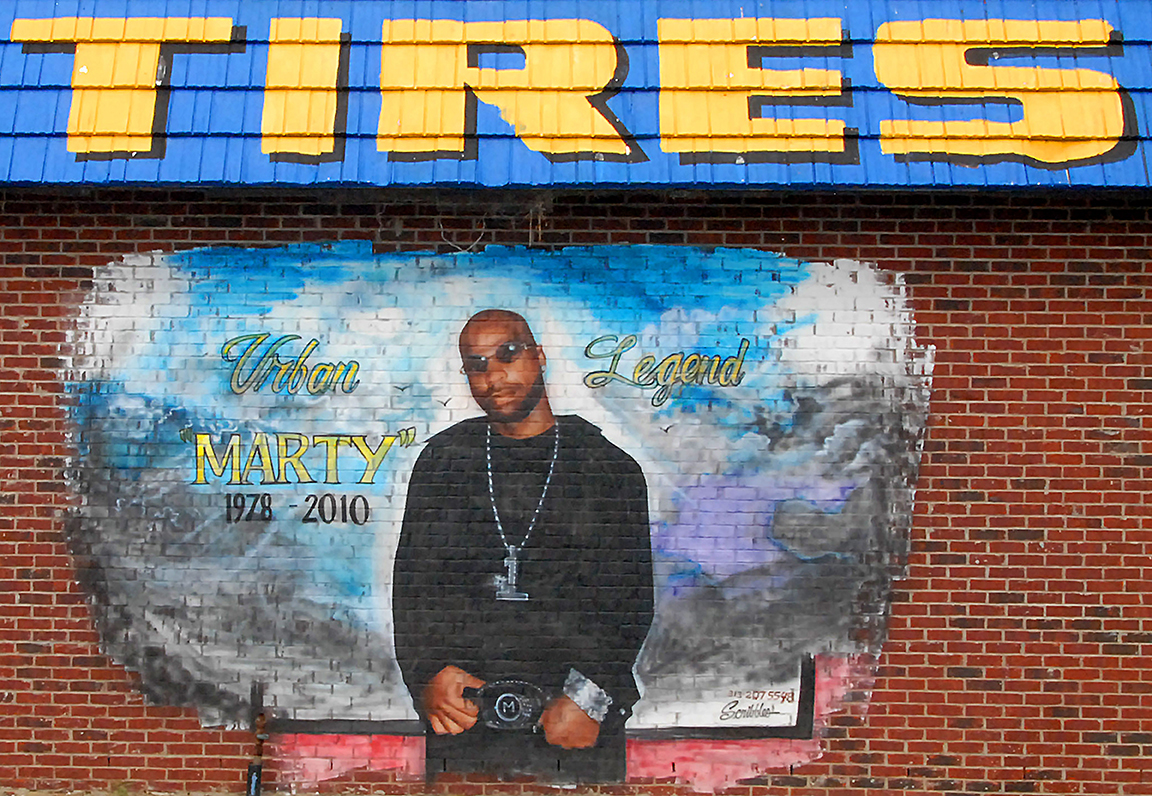 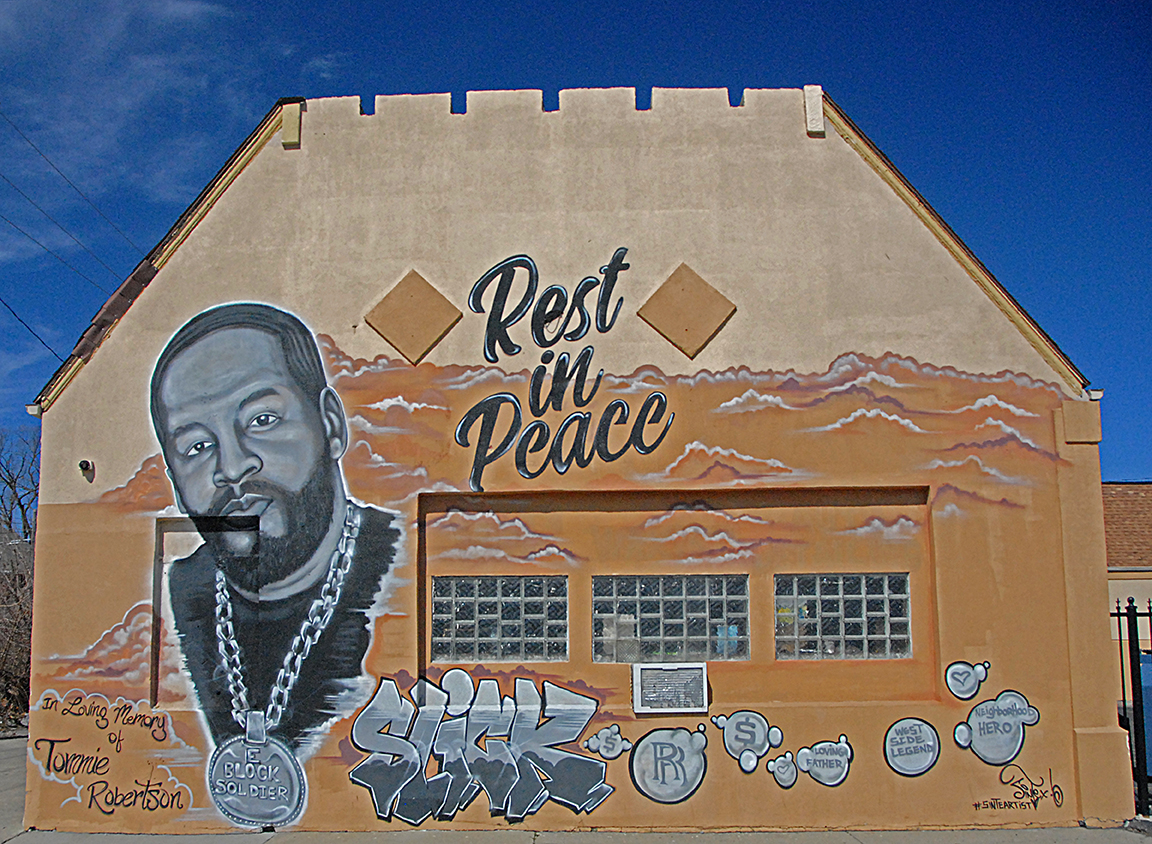 Large expanses of wall space around the city have been dedicated to some outstanding men who can only be evaluated by their status possessions, and reputations. 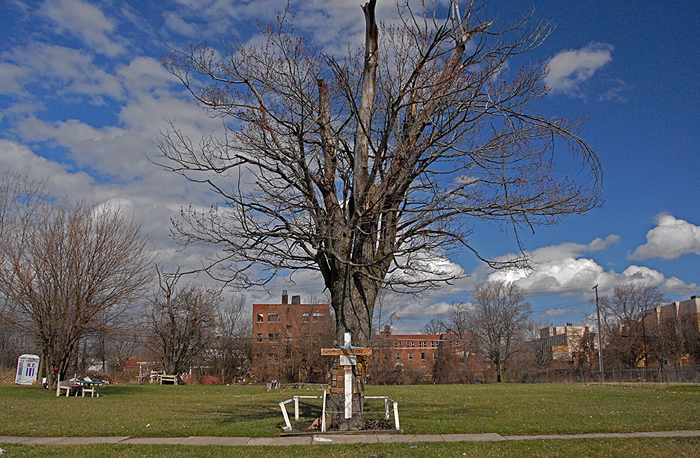 Within Detroit sits the City of Highland Park with two rather dramatic memorial/memory sites.  The Cortland Street Community used to be a stable neighborhood. Now, a large section of the block is empty with a “Memories of the Past” memorial announcing the of past and present community members. 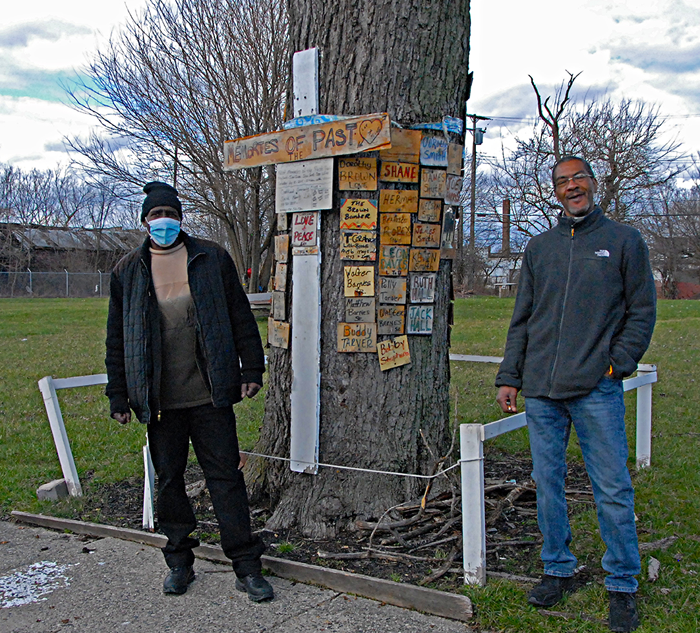 I kept my Covid distance and interviewed two resident curators, both proud of the maintenance of the landscape. This Memory site connects their environment with their daily lives. 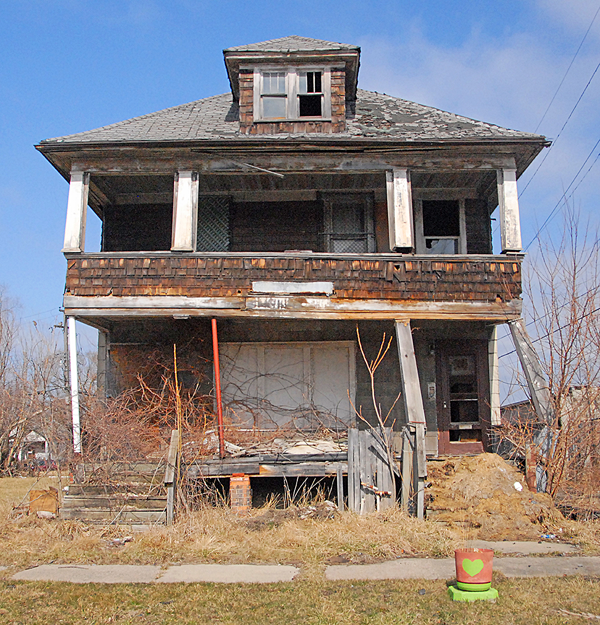 I had stopped to photograph this once prosperous example of a two-flat homes circa 1910-15 that lined both sides of Eason St. in Highland Park. 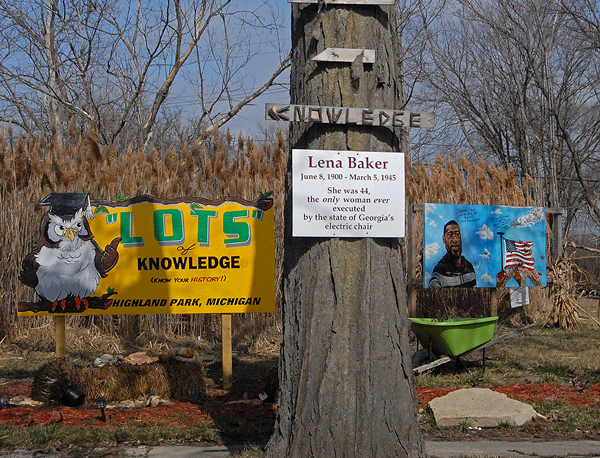 I panned left to discover “Lots of Knowledge.” The sign, at least, appears to be a planned  environmental  installation. The long  landscape may be a learning a lesson, reminding people of their social history. 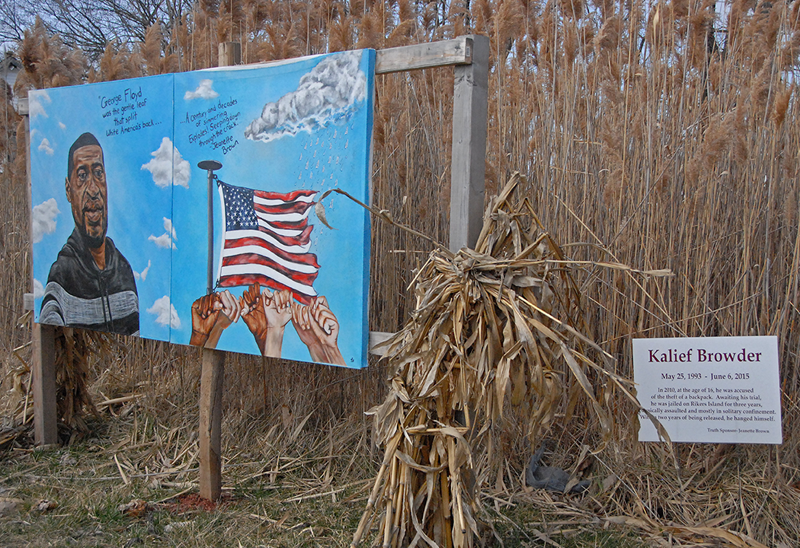 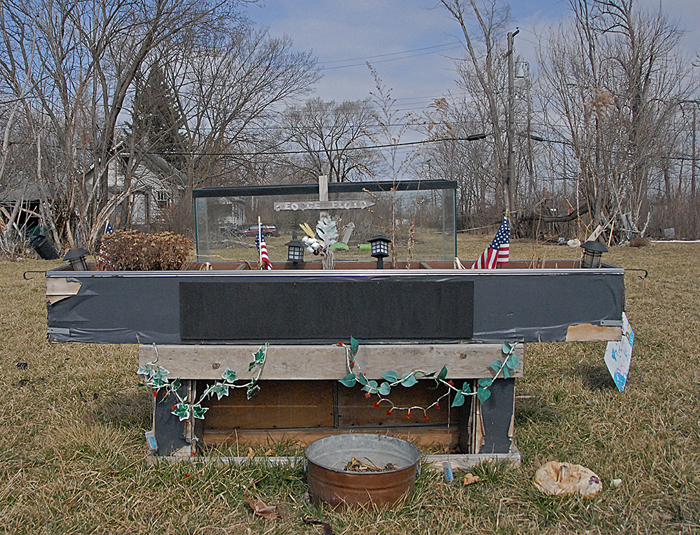 The broadly laid out constructions announced older victims of violence, in addition to the George Floyd Sign and elevated coffin/planter. 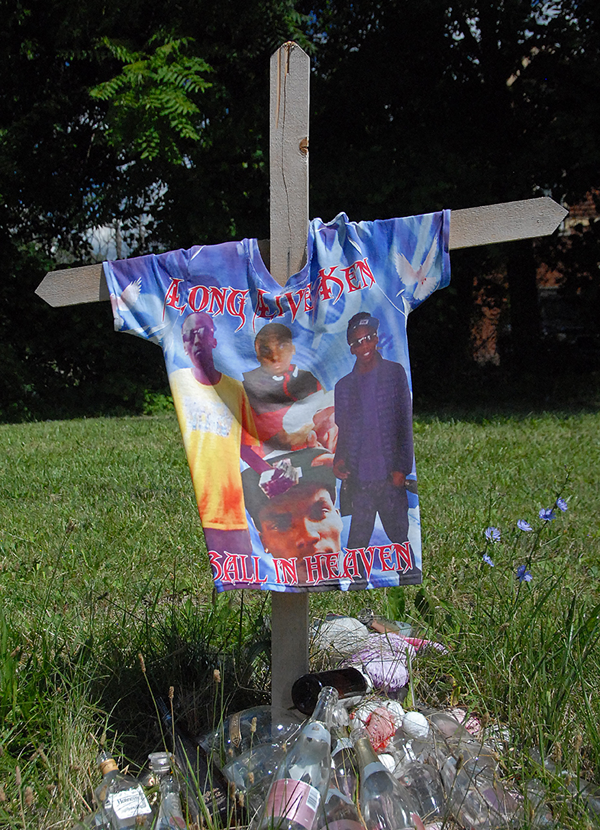 Detroit roadside memory sites are still common and colorful. The sites are often supported by a simple wooden cross. “Long Live Ken” is attached with a base littered with symbolic liquor bottles.

The “RIP MOM Memorial” is displayed on a charred wooden poll, surrounded with weathered memorabilia. These days, there aren’t a lot of wooden polls left, with metal polls the most common replacement.

A stop sign supports a collection of toys commemorating the life of Detroit Police Officer Badge 5110. 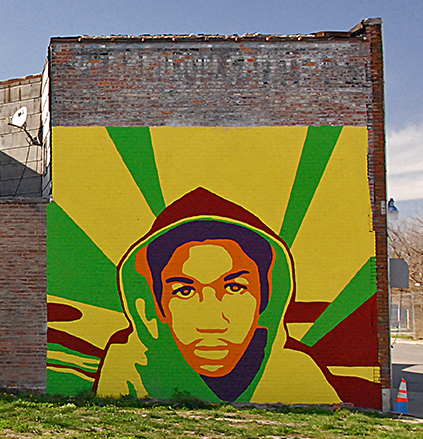 The Trayvon Martin (1995-2012) image continues to glow on the south side of the oldest family-owned barbershop in Highland Park (75 years),  Sheps Barbershop and Salon. Click here to learn more about Sheps. The second Martin image, supported by a quote from MLK at Gratiot Ave. and I-94, reminds me of this tragedy that transcended continents. 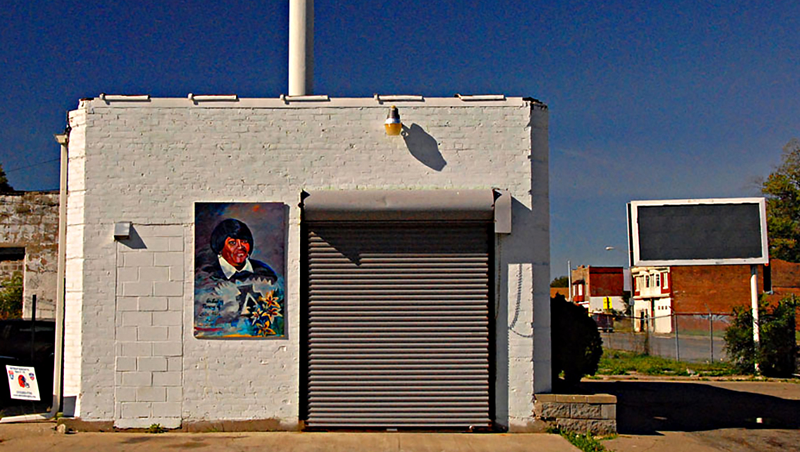 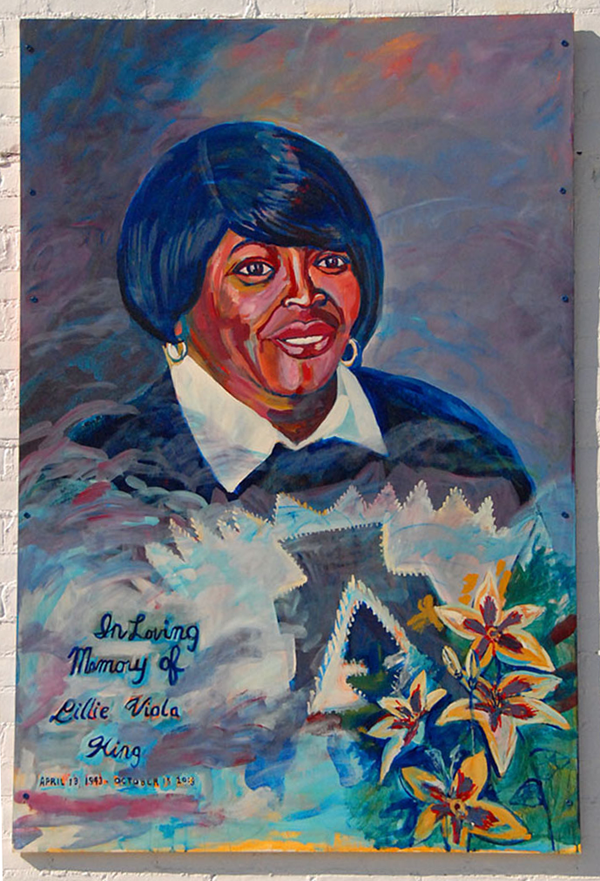 What appears to be a small mausoleum for Lillie Viola King (1943-2009). and a portrait of the Ms. King is prominently displayed on Mack Ave. 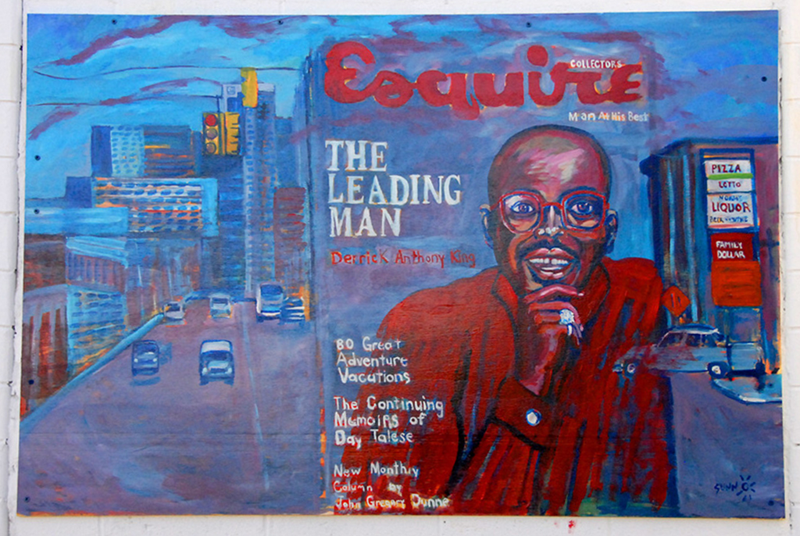 On the opposite side of the mausoleum/building are two additional images by “Sunn.” A much more creative image of the late Derrick Anthony King was re-imagined on the cover of Esquire Magazine. 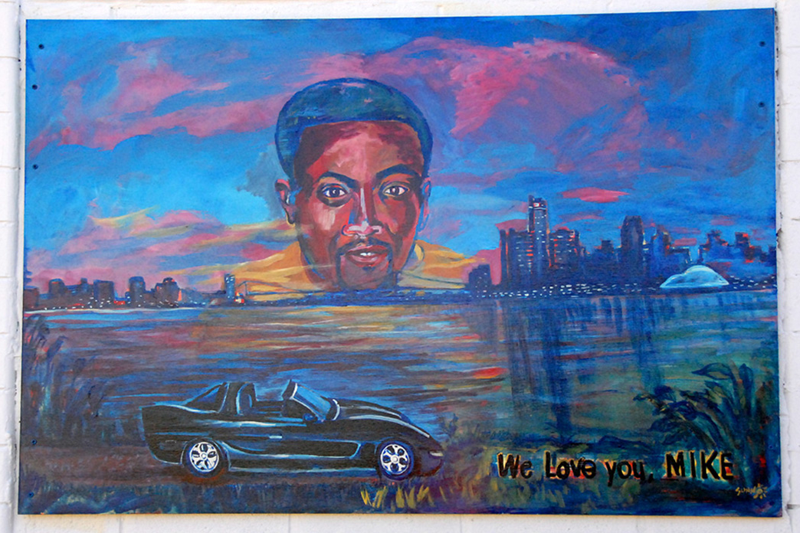 The second image, We Love You Mike, displays his attainment of wealth – that is ready to drive off the tip of Belle Isle State Park into the Detroit River. At a later date the images were gone. I spoke to a guy who was in the building, hand washing cars, who said he knew nothing about the whereabouts of the King family. 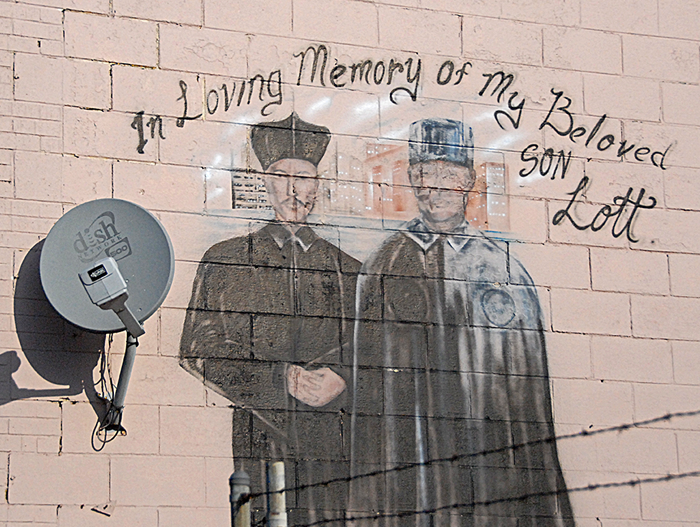 On Shaefer Rd., an illustration of a Father and his beloved Son Lott has the look of being rather weathered, although the satellite TV reception still may be good. 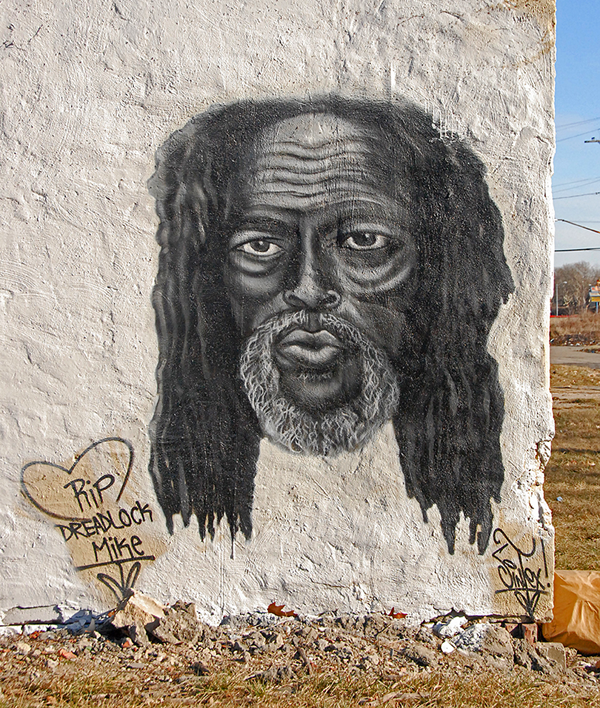 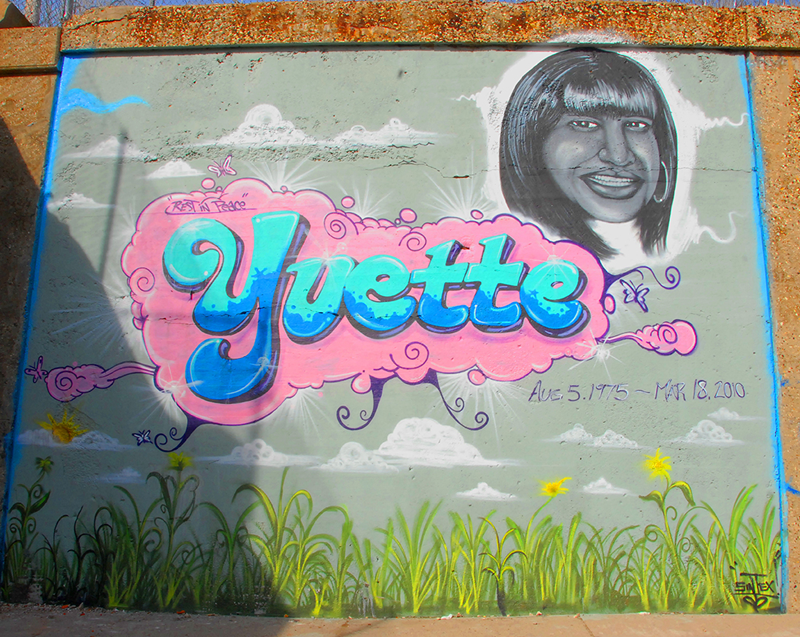 On a railroad viaduct wall leading to the Michigan Central Train Station is a rather joyful “Rest In Peace” pronouncement for Yvette  (1975-2010). 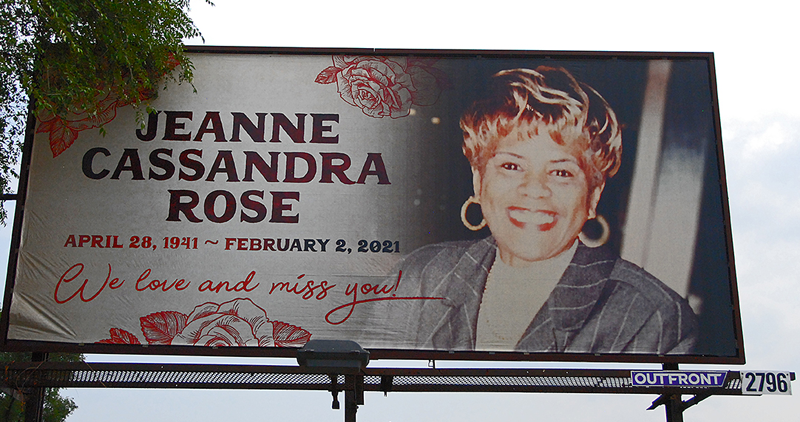 I was working on a video shoot at Baker’s Keyboard Lounge in Detroit. At the south end of the parking lot was a memorial billboard for Jeanne Cassandra Rose (1941-2021). Perhaps she was a big jazz fan. 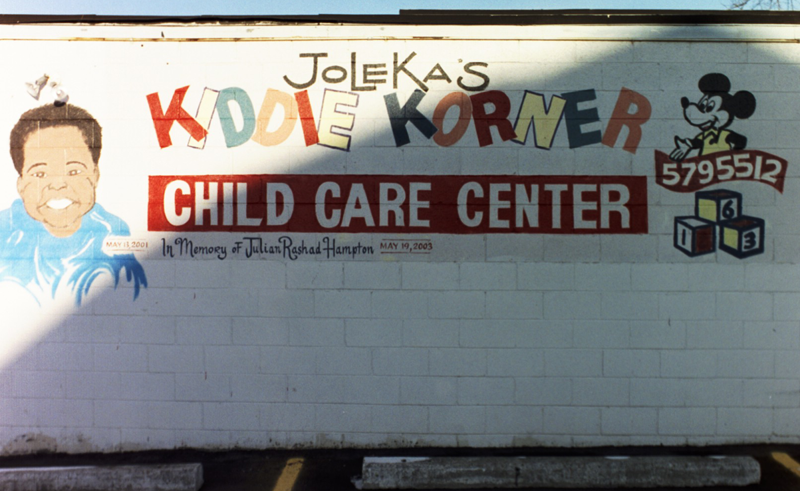 The Jokela’s Kiddie Korner uses the back wall of her corner building facing Mack Ave. traffic for effective advertising and a bonus of remembrance for Julian Rashad Hampton (2001-2003). 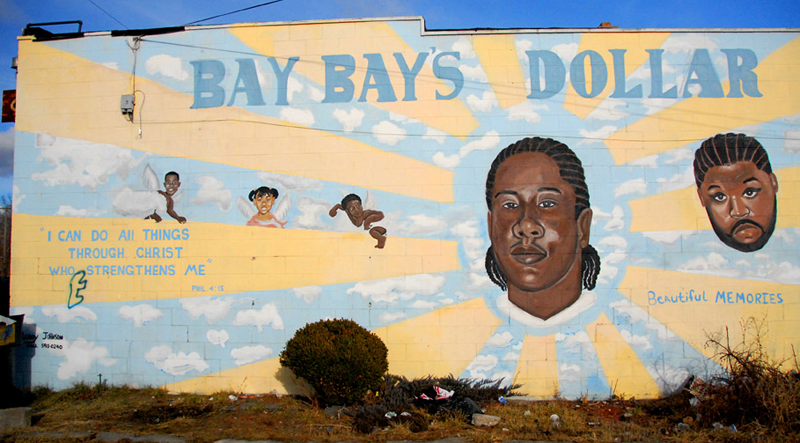 I have always liked this retail business, though it may have had a string of tragic losses. All those  “Beautiful Memories” of children in heaven were inviting me to visit Bay Bay’s Dollar Store in 2010. 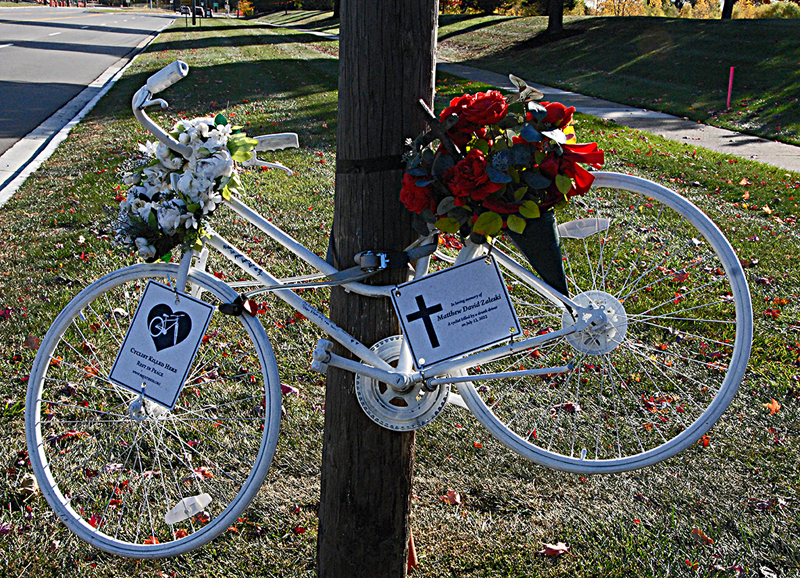 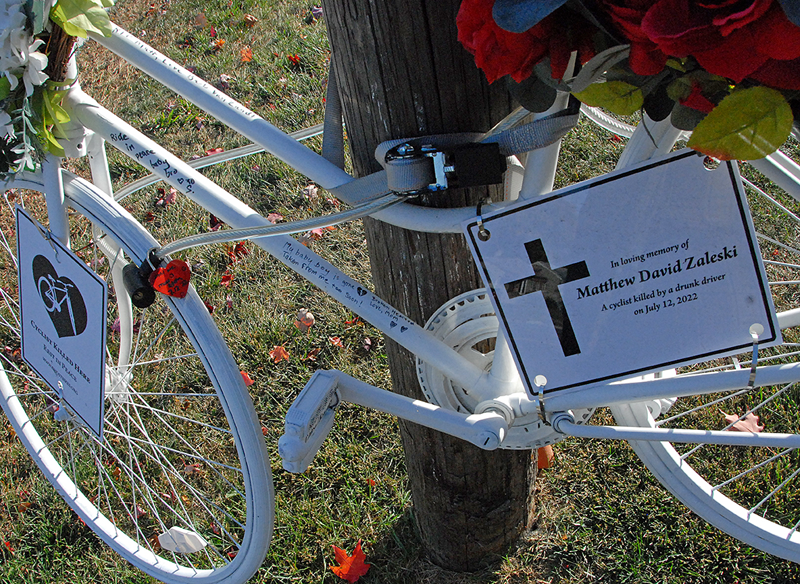 And finally, a suburban rarity I shot on October 16, 2022. A well-secured memorial for bicycle riding victim Matthew David Zaleski, who was run down July 12, 2022 on 13 Mile in Warren, Mi. I am nearly in the street taking a shot when a car pulls up in the lane and stops. The window goes down, and a male driver kindly calls, “Did you know him?” I said, “No I did not.” “Well, I did, he was a good kid.” His mother noted on the bike, “My baby boy is gone. Taken from me too soon. Broken hearted. Love Mom.”

Detroit continues to be an urban canvas for memorials.  The shrinking inventory of suitable surfaces has impacted on personal efforts to share a public vision of a loved one. Memory sites take on even more influence the longer they hold up. What has struck me is the energy and effort to publicly produce an immediate memory site that is a modest human effort that addresses more people and will not be lost in Mt. Olivet Cemetery.

The main issue may be to set an example for coming generations and to leave a mark for posterity.